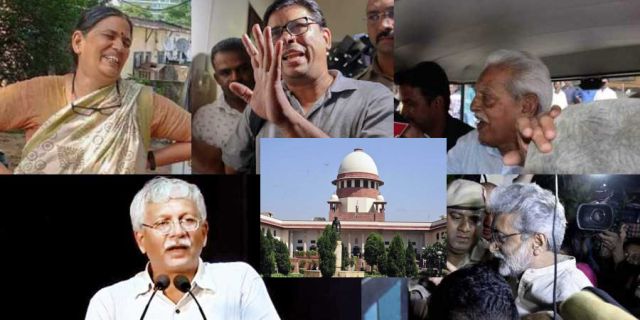 New Delhi : The Supreme Court will hear on Monday a Maharashtra government’s plea against a High Court order disallowing more probe time to the state police to investigate five activists accused of being linked to banned Maoist outfit.

The Bombay High Court in its October 24 order had set-aside the Special Court’s order permitting another 90 days time to the Maharashtra Police to complete its investigation against Varavara Rao, Gautam Navlakha, Sudha Bharadwaj, Arun Ferreira and Vernon Gonzales.

The Special Court hearing the trial had on September 2, granted the extension to the state police as is permissible under Section 43(d) of the Unlawful Activities Prevention Act.

The apex court’s three-judge bench headed by Chief Justice Ranjan Gogoi on Thursday directed the listing of the matter on October 29 as Maharashtra government’s lawyer Nishant Kanteshwarkar mentioned it for an urgent hearing.

Kanteshwarkar told the court that if the Bombay High Court order was not stayed, then the accused “urban naxals” may apply for bail and even secure it.

While Navlakha was granted relief from remand by the Delhi High Court, the others were put under house arrest, which will end on Friday.