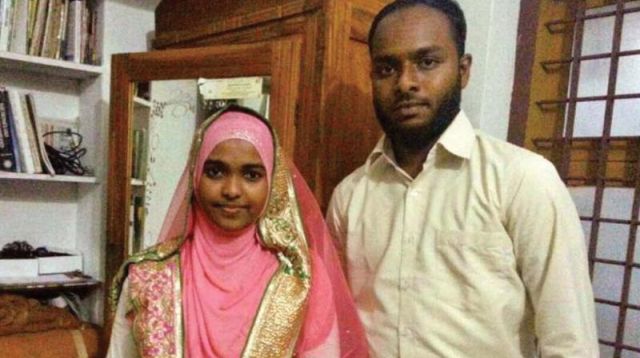 New Delhi:  In a landmark judgment, the Supreme Court on Thursday upheld Hadiya’s marriage to Shafin Jahan and set aside the Kerala High Court’s earlier judgment annulling their marriage. The apex court said that the High Court should not have annulled the marriage of Hadiya and Shafin Jahan.  It also clarified that the investigations by the NIA in respect of any matter of criminality may continue in accordance with law.

The 3-judge Bench headed by Chief Justice Dipak Misra reiterated the position that marriage between two consenting adults could not be nullified in a habeas corpus petition. The Bench comprising A M Khanwilkar, and D Y Chandrachud said that there was a roving inquiry by the Kerala High Court into Hadiya’s marriage.

The operative part of judgment read as:

“Considering the arguments advanced on both sides, in the facts of the present case, we hold that the High Court should not have annulled the marriage between appellant No.1,

The case has been dubbed as so-called “Love Jihad” by the communal and fascist forces in the country and it was handed over to NIA for the investigation. When the Chief Justice asked the NIA counsel the “offence” of Hadiya and Jahan, he did take more than 10 minutes to elicit “offences” including 153A etc.

Countering NIA’a lawyer argument, Sibal said all these ‘offences’ came under general penal laws and  Hadiya and Jahan did not commit any ‘offence under the UAPA.

The Bench made it clear that the probe agency may pursue the investigation as per law.

“We clarify that the investigations by the NIA in respect of any matter of criminality may continue in accordance with law. ………”

It is to recall that on May 25 last year, a Division Bench of the Kerala High Court had in its judgment called Hadiya’s marriage a “sham”. The High Court had annulled the marriage and directed Hadiya to return to the custody of her parents.

Following the Supreme Court’s judgment, Hadiya’s father K M Asokan said he would consider moving a review petition in the apex court against the judgment.

Reacting on the judgment, Amnesty International India said “the Supreme Court’s order restoring Hadiya Jahan’s marriage is a fitting recognition – on International Women’s Day – of the right of every adult woman to choose her religion and partner. This decision was long overdue, and it is a victory for Hadiya Jahan’s courage and perseverance.

Amnesty‘s Programmes Director Asmita Basu said: “By setting aside the Kerala High Court’s decision that described the marriage as a ‘sham’, the order also marks an important course correction.“It must now spur state governments into doing more to bring to justice people who harass and attack Hindu-Muslim couples.”

Hadiya Jahan, 24, who was born Akhila Ashokan, converted to Islam from Hinduism and married Shafin Jahan, a Muslim man, in December 2016. Following this, her father approached the Kerala High Court, alleging that she had been forcibly converted. The High Court, disappointingly, annulled the marriage in May 2017 and ordered her to be sent back to her parents’ home. In August, the Supreme Court ordered a probe by the National Investigation Agency into Hadiya Jahan’s conversion and marriage, but subsequently raised questions about the High Court order annulling the marriage.

Kerala HC asks centre why vaccines are not provided for free