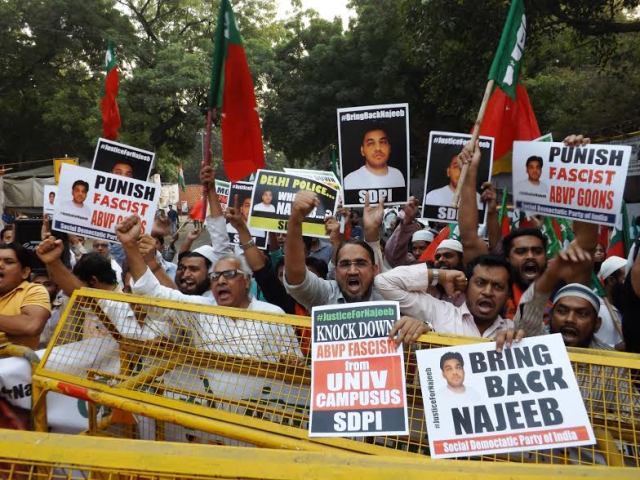 New Delhi, Oct 29 : Social Democratic Party of India organized a countrywide protest demonstration demanding justice for Najeeb Ahmed, the JNU student for over two weeks. Party’s national leadership conducted the agitation at Jantar Mantar in the national capital whereas similar protests were carried out nationwide by the respective leadership in various states’ capitals and district headquarters. Najeeb Ahmed’s mother’s presence in the demonstration was conspicuous along with his brother and other relatives. A memorandum has been addressed to the President of India petitioning the authority to issue due instructions for an unbiased and independent probe in to the JNU students missing case. The memorandum was submitted by SDPI activists in all district and state headquarters.

It is to be noted that the members of saffron outfit ABVP had allegedly assaulted Najeeb Ahmed while he was in his hostel room in JNU campus. Since the very next day, Najeed Ahmed went missing. Even though an SIT has been constituted by the Delhi police to probe the case, till date there has not been any breakthrough.

It was unfortunate that neither the university administration nor Delhi Police neither registered any FIR into the alleged case of violence on Najeeb Ahmed by ABVP goons in the hostel room in the presence of the hostel warden nor was any immediate action when the issue was reported.

A delegation led by party president A Sayeed had paid a visit and met Najeeb Ahmeds mother and other relatives at their residence. The party president had assured the family of all sorts of assistance in finding their kin missing from the JNU campus. In the very meeting, A Sayeed had directed his colleagues to organize a protest demonstration in all districts and state headquarters and submit a memorandum with the authorities concerned so as to pressurize the government to look after the issue seriously.

Party vice president Adv. Sharfuddin slammed the university authorities and Delhi Police for their inaction in addressing the issue in time. He said, rather than arresting and questioning the accused ABVP members for unleashing violence on Najeeb, the university administration and Delhi Police has further victimized him and more over after the victim’s treatment at Safdarjang hospital, transferred back to the hostel room which was unsafe.

Mohammed Shafi, SDPI General Secretary, came down heavily on the JN University Administration citing the JNU-TAs report. He said, the fact report submitted by the JNU Teachers Association evidently speaks on how the university administration spread the false information regarding the case of missing student. He demanded that a high-level probe panel be formed and handed over to in order to speed up the investigation to trace the missing JNU student.

I thank SDPI for their stern efforts being exerted in searching for my missing son. Apart from JNUSU, its SDPI who came forward to extend support in this crucial juncture, said Fatima Nafees, Najeebs mother, while the party held dharna at Jantar Mantar.

The protest was attended by leaders of different organizations, including Mohammed Arif of Popular Front, Abdul Nazar of Campus Front of India, Mufti Irshad Ahmed of All India Imams Council. SDPI General Secretary Elyas Thumbe too was present on the occasion along with a huge count of party cadres and members.