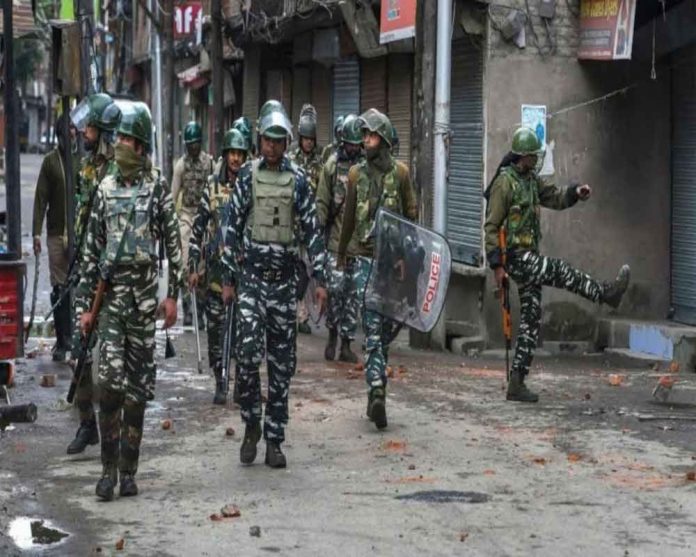 Protesting family members say two were students, another was laborer. They called it “a cold blooded murder”

SRINAGAR: The family members of three alleged Kashmiri militants who were killed by Indian forces said Wednesday that their relatives were innocent.

They also blamed the Indian police of extra-judicial killings saying they were shot down in a staged shootout.

The Kashmir zone police on Wednesday morning claimed that “three unidentified militants have been killed in an encounter in the Lawaypora area of Srinagar city and the search is underway.”

Soon after, the family members staged a protest outside the police control room in the capital Srinagar calling the killings “a cold blooded murder”.

The family members claimed that Aijaz Ahmad Ganaie and Athar Mushtaq Wani were students and Zubair Ahmad Lone was a laborer.

“We’re shocked. I don’t know why they killed our son. He was at home until yesterday. He was a student and had gone to submit his university forms. Why did they kill him?” said Bashir Ahmad Ganaie, the aggrieved grandfather of slain Aijaz Ahmed.

“Please tell them to bring my son back or kill me, too. They murdered my son,” Mushtaq Ahmad Wani, the father of another suspected militant Athar Mushtaq, told Anadolu Agency.

Maj. Gen. H S Sahi of the Indian Kilo Force told reporters on Wednesday that the three militants killed were planning “a big strike on the Srinagar-Baramulla Highway to gain publicity”.

“Since past many days, intelligence inputs were pouring in continuously about the movement of militants on the Srinagar-Baramulla highway. Yesterday, we developed leads and came to know that militants are hiding in a house right opposite to Noora hospital at Lawaypora in HMT area,” he said.

When they reached the address, he said the militants allegedly fired indiscriminately and lobbed grenades at the forces.

The militants were killed in an exchange of fire, he added.

The officer also said that one AK-47 rifle, two pistols and few hand grenades were recovered from the slain militants.

Over 200 militants have been killed in the region this year, despite the UN in early March calling for a cease-fire globally among the warring parties in view of the pandemic crisis.

Kashmir is held by India and Pakistan in parts and claimed by both in full. A small sliver of Kashmir is also held by China.

Some Kashmiri groups in Jammu and Kashmir have been fighting against Indian rule for independence, or unification with neighboring Pakistan.

According to several human rights organizations, thousands of people have reportedly been killed in the conflict in the region since 1989.