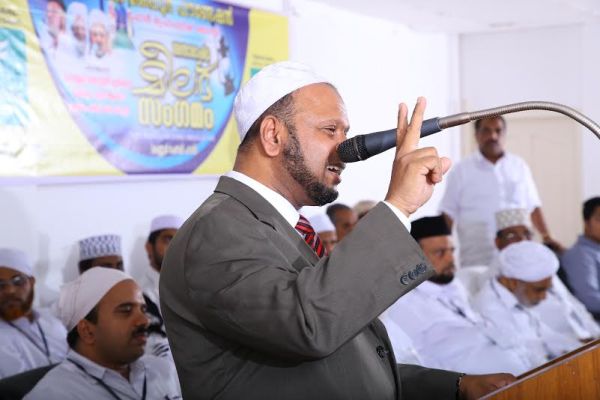 In his welcome remarks, General Convener of the Foundation Mohamed Rafi said that Rabi-Ul-Awwal Mubarak is the most significant month in the Islamic history, because humanity has been blessed in this month by the birth of the Holy Prophet Muhammad (P.B.U.H) and it is the third (3rd) month in the Islamic calendar.

Inaugurating the conference, the Foundation chairman Sayid Aslam Al-Mashoor Thangal said that the month of Rabi Al-awwal is well known in the entire Muslim world due to birth of Holy Prophet Muhammad (S.A.W). His birth took place in Makkah in the year of the Elephant, which corresponds to 571 C.E. The Muslims in East and West celebrate the Prophet’s birth anniversary on Rabi al-Awwal. Such an occasion is meant to remind people of how the Prophet lived his life. Allah Almighty directs us to follow in the footsteps of His Beloved Messenger

“Verily, in the Messenger of Allah, you have a good example for him who looks to Allah and the Last Day, and remembers Allah much.” (al-Qur’an, 33: 21)

Aslam Thangal said celebrating Milad means to send salutations to the Prophet [pbuh], give charity to the poor (Sadaqah Khairat) and remember wilaadah (Birth) and virtues of the Prophet [May Allah bless him and grant Him peace].

In this verse, Allah Almighty tells us that we should be happy when we receive blessings and mercy from Him. Without doubt, the Prophet [pbuh] is the greatest mercy and blessing of Allah Almighty.

Dr. Sayyid Ghalib Al-Mashoor, Vice Chairman of the Foundation and the President of indo-Kuwait Friendship Society in his speech said that the sacred month of Rabi-ul-Awal is especially important to the Muslim world, because on this month Prophet Muhammad (S.A.W) was born, who led humanity from darkness to light and who is described by Allah as “a mercy to all the worlds – Rehmat-ullil-Alimeen”. In celebration of Rabi-ul-Awal, Muslims all over the world urged to get together and arrange Mehfil-e-Zikr for the whole month.

Dr. Al-Mashoor said that in down town of Cairo area named “Sayyid Al Hussain” where a big tent been erected for 30 days in which many Islamic scholars’ speech been broad casted by various Islamic scholars from Arab and Al Azhar University to talk about the Seerathu Nabi. They gather to discuss the bounty and favor which Allah SWT has blessed the Muslims with by guiding them to the righteous path of Islam and the teachings of Holy Quran and Sunnah of the final messenger of Allah. He added that Friday is a special day for Muslims because this is the day that Allah created Adam [A.S] and end of the world will happen also on Friday.

President of Jamyiyyathul Muaallimeen of Kannur District Shaikh Maniyoor Moulavi also spoke on the occasion. He said that the occasion like the month of Rabi-ul-Awal is meant to remind people of how the Prophet lived his life and to rejuvenate their Eiman.

In his key note address Musthafa Aakkod Hudawi, a well known Islamic scholar, said that the month of Rabi-ul-Awal is not exceptional for being the month of birth of our beloved Prophet Hazrat Muhammad (S.A.W), but it is the month in which our Holy Prophet (S.A.W) began his journey of Hijrah and built the first Masjid of Islam, Masjid-e-Quba. Rabi-ul-Awal is also significant, as the first Jummah prayer was established in this month.