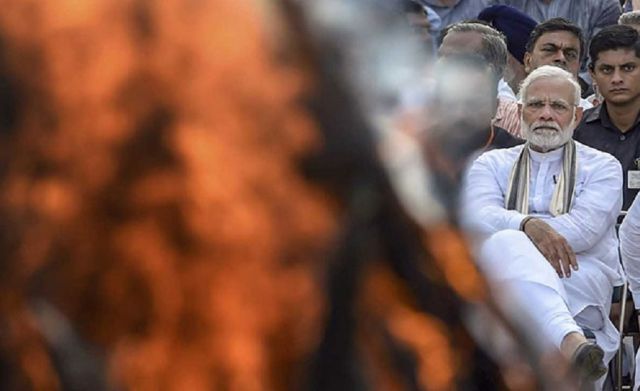 Mumbai : The Shiv Sena on Monday targeted the Maharashtra Police for the arrests of five left activists last week claiming they were reportedly “hatching a conspiracy to overthrow the central and state governments” besides allegedly “plotting a Rajiv Gandhi-style assassination of Prime Minister Narendra Modi”, among others.

“The police contentions behind the arrests are ridiculous… The erstwhile government of Prime Minister Manmohan Singh was voted out and removed by the people — not by the Maoists.

“As of now… at least, it is still possible to change the government through the democratic processes,” the Sena said.

“The (Pune) police must not shoot off their mouths like this and the government must bar them from such statements… It’s sheer stupidity,” the Sena said in sharp edits in the party mouthpieces, “Saamana” and “Dopahar Ka Saamana”.

While the practice of “using the police” for different aims is nothing new for the politicians and government, in the present instance, “the faster the truth emerges, the better,” (remove the ‘mukhota’) for the police, demanded the Sena.

The second argument of the Pune police was that Modi was allegedly being targeted in a “Rajiv Gandhi-style assassination”, at which the Sena clawed at the Pune police.

“The former PMs, Indira Gandhi and Rajiv Gandhi were fearless and courageous leaders… It was their boldness which claimed their lives… But Modi will never indulge in such adventures.

“He is already provided the best security in the world and not even a bird can overfly him,” the Sena pointed out.

Dismissing the police contentions, the ruling Bharatiya Janata Party ally in Maharashtra and the Centre, the Sena said that “if these handful of Maoists had so much political strength”, they would never have lost their (Communist) governments in West Bengal, Tripura, Manipur, etc.

Urging the government to rein in the police, it said the action last week was one of the biggest attack on Maoism by the Pune police culminating in the arrests of five “urban-naxals” in simultaneous nationwide raids.

In many of these areas they run parallel governments, killing many security personnel and even top politicians like Congress leader V.C. Shukla and others.

“There are some doubts that something is wrong somewhere with these arrests… The facts must come out before the BJP becomes the butt of new jokes,” the Sena concluded.