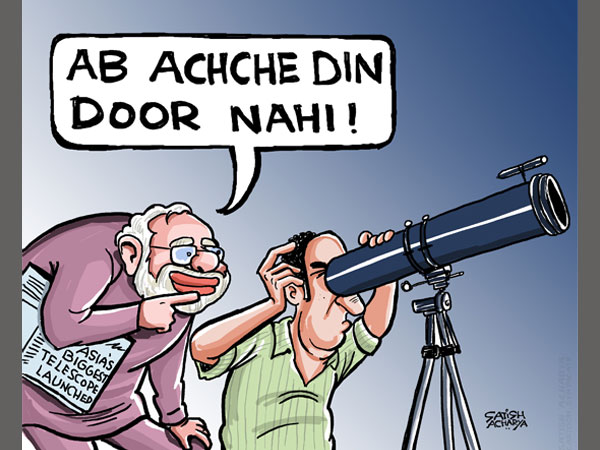 Achhe din await us all. So where are they? The BSE benchmark Sensex plummeted over 800 points in afternoon session Thursday as rupee sank to another low amid boiling crude prices, weak global cues. The rupee also plunged to a new low of 73.81 against the dollar, while the masses wait for Achhe din.

Economy is prospering. Any BJP leader would still insist. No matter all sectoral indices are trading in the red, with IT, auto, pharma, banking and realty stocks witnessing most losses.

With rupee and crude oil showing no signs of stability, weakness is likely to continue in the coming sessions, they said. Brokers said volatility was seen in most Asian markets as high US yield and good economic data led to fear that investors would move to the US, dampened trading sentiments here.

Rupee is also ailing. The Indian rupee on Wednesday crashed below the 73 mark against the dollar for the first time ever on strong demand for the American currency from importers amid rising global oil prices and unabated capital outflows. At the Interbank Foreign Exchange (forex) market, the domestic currency dropped 43 paisa to 73.34 against the US dollar in the early trade.

So where are the Achhe din?