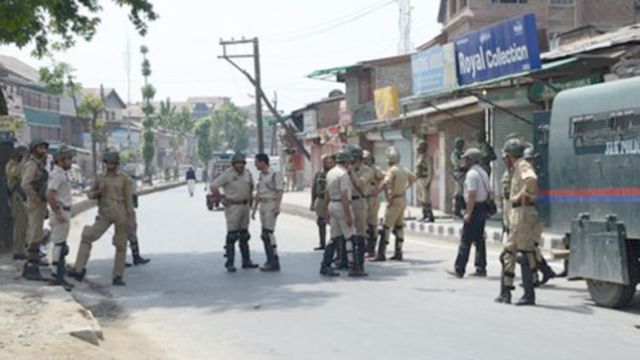 Srinagar : Authorities on Thursday placed senior separatist leaders under detention in the summer capital Srinagar to prevent their participation in a protest shutdown that derailed life in the Kashmir Valley.

Police took Muhammad Yasin Malik, Chairman of pro-Azadi Jammu and Kashmir Liberation Front (JKLF), into preventive custody here to stop him from taking out a protest march in the city.

Mirwaiz Umer Farooq and Syed Ali Geelani were placed under house arrest at their residences on the outskirts of Srinagar.

The Joint Resistance Leadership (JRL), a grouping of separatists headed by Geelani, Mirwaiz Farooq and Malik, called for the shutdown against the killing of senior journalist Shujaat Bukhari and continuing killings of civilians in Kashmir.

Bukhari, editor of “Rising Kashmir” newspaper, was shot dead along with two security guards in Srinagar on June 14.

Shops, public transport, other businesses and educational institutions remained shut on Thursday at most places in Srinagar while attendance in banks, post offices and government offices was thin due to non-availability of public transport.

Private transport and some three-wheelers, however, plied in uptown areas of Srinagar.

Taxis and buses carrying tourists to Sonamarg, Pahalgam and Gulmarg hill stations operated as usual. Train services were suspended in the Kashmir Valley as a precaution.

No incident of stone pelting was reported in the Valley.

The shutdown also derailed normal life in all other major cities and towns of the Valley, where a separatist campaign has been raging since 1989.

Despite the shutdown, Governor N.N. Vohra and all senior bureaucrats of the state government attended their offices in the Srinagar Civil Secretariat on Thursday.

Vohra had on Wednesday too visited the Civil Secretariat and was presented a guard of honour by police though June 20 was a public holiday in the Valley on account of the annual festival at the Mata Kheer Bhawani shrine, the holiest for Kashmiri Pandits.

Vohra took charge of the Jammu and Kashmir administration after the PDP-BJP coalition government collapsed following the BJP’s withdrawal of support to the PDP.