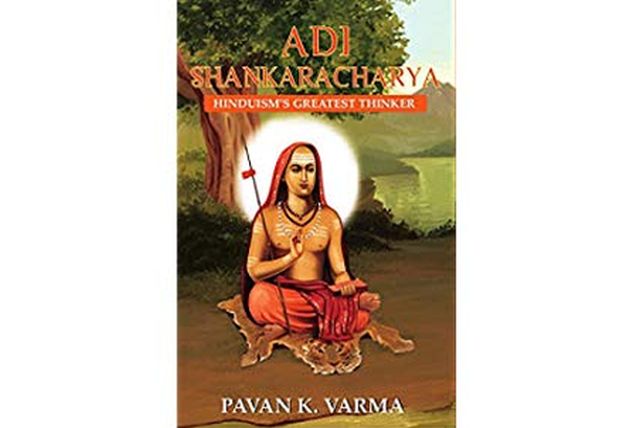 This must be one of the greatest tributes ever paid to Shankaracharya, the quintessential “paramarthachintakh”, who wished to search for the ultimate truths behind the mysteries of the universe. His genius lay in building a complete and original philosophical edifice upon the foundational wisdom of the Upanishads.

A gifted writer, Pavan Varma, diplomat-turned-politician and author of several books including one on Lord Krishna, takes us through Shankara’s short but eventful span of life during which, from having been born in what is present-day Kerala, he made unparalleled contributions to Hindu religion that encompassed the entire country. Hinduism has not seen a thinker of his calibre and one with such indefatigable energy, before or since.

Shankara’s real contribution was to cull out a rigorous system of philosophy that was based on the essential thrust of Upanishadic thought but without being constrained by its unstructured presentation and contradictory meanderings.

He was greatly influenced by three basic texts of Hindu philosophy: Upanishads, the Brahma Sutra and the Bhagavad Gita. He wrote extensive and definitive commentaries on each of them. Of course, the importance he gave to the Mother Goddess, in the form of Shakti or Devi, can be traced to his own attachment to his mother whom he left when he set off, at a young age, in search of a guru and higher learning.

Against all odds, Shankara created institutions for the preservation and propagation of Vedantic philosophy. He established “mathas” with the specific aim of creating institutions that would develop and project the Advaita doctrine. He spoke against both caste discriminations and social inequality, at a time when large sections of conservative Hindu opinion thought otherwise.

Shankara was both the absolutist Vedantin, uncompromising in his belief in the non-dual Brahman, and a great synthesiser, willing to assimilate within his theoretical canvas several key elements of other schools of philosophy. He revived and restored Hinduism both as a philosophy and a religion that appealed to its followers.

Varma rightly says that it must have required great courage of conviction as well as deep spiritual and philosophical insight for Shankaracharya to build on the insights of the Upanishads a structure of thought, over a millennium ago, that saw the universe and our own lives within it with a clairvoyance that is being so amazingly endorsed by science today. The irony is that most leading scientists, particularly outside India but also within, have little knowledge of the structure of Shankara’s philosophy and the transparent interface it has with scientific discoveries today.

Shankara wrote hymns in praise of many deities but his personal preference was the worship of the Mother Goddess. The added value of the book is that it has, in English, a great deal of Shankara’s writings. Unfortunately, most Hindus today are often largely uninformed about the remarkable philosophical foundations of their religion. They are, the author points out, deliberately choosing the shell for the great treasure that lies within. This is indeed a rich book.