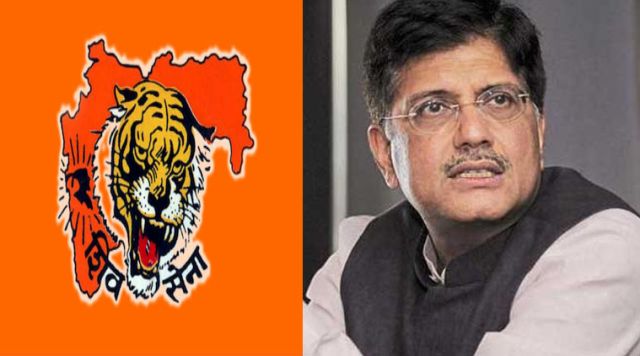 Mumbai : The Shiv Sena pounced on the Bharatiya Janata Party (BJP) on Saturday, seeking to know “what action the (current) Finance Minister Piyush Goyal has taken against the RBI governor and chiefs of banks” which have been defrauded by big industrialists who have fled the country.

“How many bank chairmen who gave fraudulent loans have been sent to jail? Even the BJP President Amit Shah is the Director of Ahmedabad District Cooperative Bank… It collected Rs 745.59 crore of spiked (Rs 500 – Rs 1,000) notes within five days after demonetisation,” the Sena asked.

It said that a Gujarat cabinet minister Jayesh V. Radadia is a Chairman (of Rajkot DCB), which also secured the second highest amount in the country after ADCB – Rs 693.19 crore deposits of the old currency notes.

“How could so much money be deposited in just one (ADCB) bank? This is a serious issue and must be probed in depth,” the Sena said in sharp edits in the party mouthpieces ‘Saamana’ and ‘Dopahar Ka Saamana’.

Accusing Goyal of not viewing the issue with the seriousness it deserves, the BJP’s ally said that there was discrimination among the cooperative banks and different sets of rules were applied while dealing with various DCCBs in the country.

The Maharashtra DCCBs were debarred from exchanging/accepting the old notes, which was subsequently withdrawn, but it served to hit the banks’ economic position very badly, the Sena pointed out.

“For instance, the Nashik DCB’s deposits of Rs 341 crore was declared asuspicious’ and frozen in the bank. Other DCCBs also faced similar issues at that timea Demonetization triggered massive chaos in all sectors of the economy,” the Sena edit said.

“The country is today reeling under the impact of that demonetisation… The Reserve Bank of India Governor (Urjit Patel) is the biggest culprit for this mess and he should be prosecuted for it,” the Sena demanded.

Recalling the former RBI Governor Raghuram Rajan’s observations on the issue, the Sena reiterated that “the country has paid a heavy price for demonetisation”, the unorganised sector is in complete disarray, unemployment has increased and many others lost their jobs.

The ruling ally reminded how the country was told that “terrorism would end in Jammu and Kashmir after demonetisation, but in reality, the very next day after the Prime Minister Narendra Modi’s announcement on November 8, 2016, bundles of fake Rs 2,000 currencies, newly introduced, were found in that state.”

The Sena said the country is experiencing an economic mess which is increasing, and even the government’s financial advisor Arvind Subramaniam has quit and left the country.

“Amidst all this, the government is displaying its power to the public sector Bank Of Maharashtra (whose top officials including the CMD and ED were arrested this week)a This is cheating since the big fish have already absconded. The BoM officials and the builder D.S. Kulkarni (an accused in the case) have been caught and will not go anywhere… Congratulations for your tough action,” the Sena added.