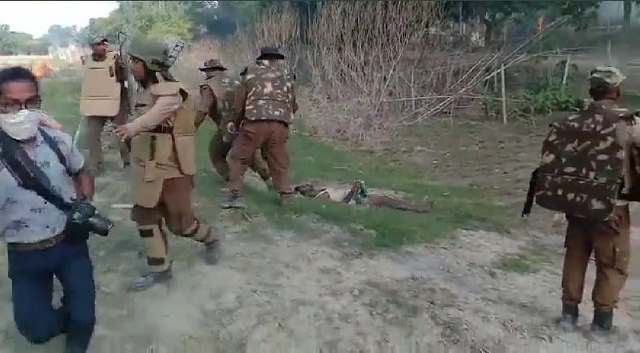 At least two persons were killed and several injured as the police opened fire at people protesting over the state government’s eviction drive against landless Muslim families in Sipajhar in Assam’s Darrang district on Tuesday. The victims have been identified as Moinul Haque and 12-year-old Shaik Farid.

On camera, policemen in riot gear and armed with guns and sticks chased and attacked protesters and even firing shots. Some visuals that have gone viral show policemen indiscriminately firing at the protestors. A photographer is seen jumping over the motionless body of Haque. The photographer was allegedly hired by the Darrang District Administration.

Disturbing video : #Massacre of poor Muslims living in the Char (sand bar) area of Dhalpur, Darrang, Assam – Sipajhar police station.
First these poor Muslims’ huts were demolished in violation of court orders during rains. Then they are being massacred by police and thugs. pic.twitter.com/B5Fw4hTTT6

Assam Chief Minister Himanta Biswa Sarma indicated that the policemen resorted to action in self-defence. He has ordered a probe – to be headed by a retired High Court judge – into today’s violence.

800 Muslim houses were demolished and almost 5,000 persons were forced to live under the open sky on Monday in Dholpur 1 and Dholpur 3 villages of Sipajhar. Two mosques and a madrassa were also razed.

Chief Minister Himanta Biswa Sarma has praised the eviction in a tweet. He had said 4500 bighas of land were cleared by ”evicting” 800 households. However, rights groups had criticised the government for evicting people without having any rehabilitation plans.

A photojournalist jumping on a dead man just killed by security forces is the real life equivalent of what assorted news anchors have been doing in their studios past few years.
A dance of death. #Assam

On Thursday, thousands of locals protested against the eviction drive. Later the police resorted to using force against the unarmed protestors.

The account details of Shaikh Farid’s kin is being shared below. Readers can support his family as they are under financial duress.