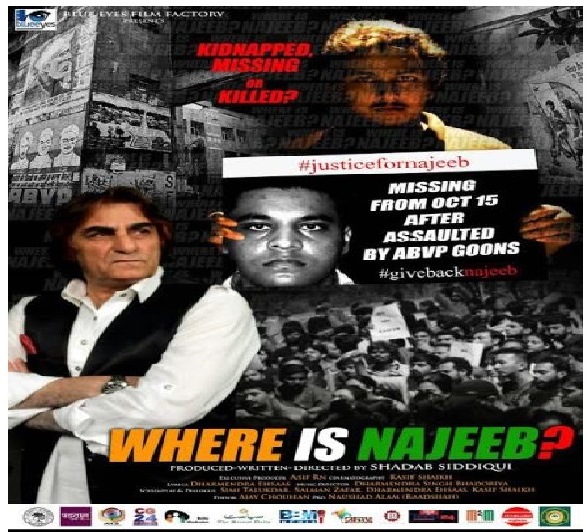 Aligarh : Catering to the disappearance of JNU student Najeeb and the politics surrounding the issue, AMU Students Union in collaboration with social organization SOCH…beyond the imagination, is organizing the screening of short movie ‘Where is Najeeb’ on 26thJanuary at Auditorium Boys Polytechnic, AMU at 2 PM.

Director Shadab Siddiqui will be visiting AMU for the screening of his movie. Shadab has been deeply associated with the issue and has also made and directed movies surrounding other social issues as well.

‘Where is Najeeb’ is a Blue Eyes Film Factory production, made by producer Kashif Shaikh. The music is soulful and has been given by music director Dharmendra Singh Bhadoriya, written by Dharmendra Ehsas and sung by Maduprna S. Vaidya. Casting in the movie are actors Ali Khan, Archana Prajapati, Sarita, Saahil Sheikh, Jawed Rahman, Rohit KP and Qaseem Haider.

AMUSU President, Faizul Hasan has expressed his views on the issue of Najeeb and says that “We will screen the short movie at Auditorium Boys Polytechnic, AMU and have also invited director Shadab Siddiqui for the same. It is the responsibility of AMUSU to fight and speak for the rights of students anywhere in the country.”

AMUSU Secretary, Nabeel Usmani says that, ”We have protested against the Najeeb issue in various places like Bahraich, Azamgarh, Aligarh, Delhi, Patna, Lucknow, etc. and we will make sure that the issue doesn’t die down until justice is granted.

On the other hand AMUSU Vice President, Nadeem Ansari expresses that the AMUSU and the student fraternity will fight for the student’s rights till the end.

Talking on the sudden disappearance of JNU student Najeeb and the lack of justice as of yet, SOCH President, Dr. Saleem Mohammad Khan and Secretary, Dr. Danish Suhail say that, “We have worked on various issues in the past, ranging from student welfare to relief camps during natural calamities. Najeeb’s issue is a student issue and students are our country’s future. We will do whatever we can to protect the future of our country.”

Director Shadab Siddiqui urges the audience to come and see the short movie and wishes that the message is delivered to homes across the country and that the mysterious disappearance of student Najeeb be felt and fought for till justice is received.