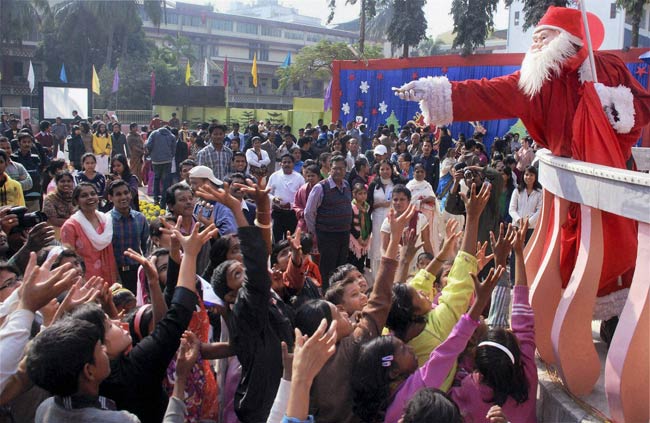 Christmas festival, which marks the birthday of Jesus Christ, is celebrated in almost all parts of India. Christmas is a national festival and called ‘Bara Din’ or Big Day, courtesy the legacy of the British ‘Raj’ in India. There are many unique features about Christmas celebrations in India.

As the Christmas approaches, the entire country is in a festive mood and people from different faiths, ethnicities and backgrounds come together and take part in Christmas celebrations.

The Christmas celebrations in the cities of India are almost a replica of the global culture. The shops are decorated with Bells and Santa Claus that symbolizes Christmas marking the beginning of the festive season.

During this time carol services are held in the churches and carol singers making appearances at the door steps during late night. During this time Santa Claus, the special character of Christmas is most sought after person by the children of all faiths.

India’s smallest state, Goa which is on the west coast has about 26% Christian population. Christian homes hang out giant paper lanterns, in the shape of stars, on top of their houses and as one walk down the road, the stars float above you in rows. Christmas Trees are put up in every Christian house.

Here people like to go carol singing around their neighbors for about a week before Christmas. The Christmas cake is baked with traditional rich fruit and lots of local sweets are also made during the Christmas festival in Goa.

In Southern state of Kerala where there are 22% Christian population. Like Goa, here too Christmas is celebrated with huge religious fervor. Traditional Catholics fast from 1st to 24th of December, until the midnight service.

Every house is decorated with new variety of Christmas stars and has well decorated Christmas tree.  Here some Christians put small oil burning clay lamps on the roofs of their homes to show their neighbors that Jesus is the light of the world.

The northeast states of India; Manipur, Meghalaya, Nagaland and Mizoram have high Christian population. Over 5.3 million Christians live in Mizoram, Nagaland, Meghalaya and Manipur, while there are a significant number of Christians in the other northeastern states of Tripura, Assam and Arunachal Pradesh. One of the special features of the Christmas celebration here is Christian customs are mixed with the individual tribal customs.

The Western Indian metropolis Mumbai has one of the largest urban Christian populations. Many of the Christians in Mumbai have roots in Goa and so they follow the Christmas traditions of Goa like putting up the star lanterns and the depiction of the best of the nativity scenes at their homes.

In the eastern metropolitan city of Kolkata the annual Kolkata Christmas Festival (KCF) starts a week ahead with food stalls and live bands performing in the open space. The Christmas season begins with a fun-filled Christmas parade at Park Street whose decoration resembles the Oxford Street of London. There are other sots like Bow Barracks in Kolkata that comes alive during Christmas.

The rural space of central India which dominated by the tribal Christians mostly of the Bhil tribe has Christmas celebrations with its own local flavor which is more tribal in nature.  Here Bhils go out in nigh a week before Christmas to sing carols in their own language. They also tell the Christmas stories to the surrounding villages in singing and dancing format.

On the Christmas Eve, the Midnight Mass service at the churches is a very important event and Christians attends it in large numbers. The families walk to the church for themidnight mass and when the service is over at the stroke ofmidnight, the church bells starts ringing and fire crackers are burst to announce that Christmas Day has arrived.

Some greet each other saying ‘Merry Christmas’ in English, others use the local expression in different languages spoken in India. The day that follows is Christmas and it is filled with massive feast that goes on with the giving and receiving of presents throughout the day.

Christianity is the third-largest religion in India. With approximately 27.8 million followers, Christians constitutes about 2.3 percent of the total Indian population. Indian Christians have the highest ratio of women to men among the various religious communities in India.

Christians are found all across India and are visible in all walks of life. Indian Christians have contributed significantly to India’s development and are well represented in various spheres of life.