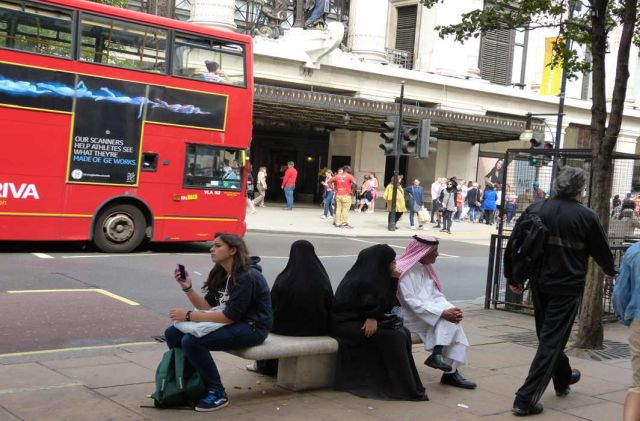 Just when liberals were beginning to pelt stones at him, a startling turn to the debate was given by Taj Hargay, Imam of Oxford. “The burqa is a Wahabi fifth column… We will wake up in the Islamic Republic of Britain.”

Johnson’s observation is mischievous, and has a political purpose, the Imam’s an exaggeration. The observations are troubling for an Indian Muslim.

I would avoid being judgemental on a community which has been under immense pressure because of rampaging Islamophobia since the 1990s. And yet, I cannot help asking: Is the burqa a response to nasty Islamophobia or a means of aggravating it?

Aggravation of the problem is surely not our purpose. Then whose purpose is served by Muslim women floating around Oxford Circus in gear which distances them, in geometrical progression, from the host population? The clerics, eager to consolidate their congregations? Wouldn’t it be wonderful if these congregations had in their midst scholars, doctors, writers, scientists, entrepreneurs, rather than pliant women fitting Boris Johnson’s description.

I am troubled for another reason. After extensive travel around the world, I am inclined to cast my vote in recent years for Britain as a society where human rights, rule of law, race relations are most secure. That is why I am uneasy at the two observations.

Let me turn to India to bring out my point, by comparison, in bolder relief.

The depths to which Hindu-Muslim relations have sunk in India is attributed by pundits to the brazenly communal politics of the ruling Bharatiya Janata Party (BJP) under Prime Minister Narendra Modi since 2014. If an ancient civilisation, embracing 1.25 billion people, can be so totally transformed in merely four years, Modi and his cohorts deserve to be celebrated as miracle men.

No, the present government has clearly accelerated the communal agenda but the ground for it was diligently laid over 71 years of independence. The ruling party for most of these decades was the Congress.

Social disharmony was built into the manner in which India’s Partition was affected. The Congress was firmly opposed to the two-nation theory enunciated by Mohammad Ali Jinnah, founder of Pakistan — that Hindus and Muslims constituted two separate nations. But the Congress accepted Lord Mountbatten’s June 3, 1947, plan for Partition in double-quick time.

By that logic, once the Congress Working Committee had accepted a Muslim state, with a small Hindu minority, named Pakistan, it logically followed that the rest of India would be Hindustan or a Hindu state with a substantial Muslim minority. In other words, on August 15, 1947, India glided seamlessly from British Raj to Hindu Raj but Nehru chose not to use the term “Hindu” for a variety of reasons.

A “Hindu” state was an affront to his self-image. Self-image was important to Nehru. In his evolution, there was a phase when he was angry with his father for having hired an English governess for his sister, Vijaylakshmi Pandit. “Bhai (brother) was cross,” Mrs. Pandit told me, “because British aristocracy those days preferred French governesses.”

The basic reason why Nehru avoided the term “Hindu” to describe the new found state was Kashmir. How could a Hindu state claim the Muslim majority province of Kashmir on the principle of contiguity?

Look at it from the hardcore Hindu perspective. After a thousand years of Muslim rule, 200 of British, the Muslim state of Pakistan does come into being. But, alas, no Hindu state. The sophistry of why it is so is lost on the millions. This is where the Hindu communalist pitches his tent.

It turns out that, over the decades, a compulsive hatred for Pakistan has emerged an acid test for nationalism. Into this bubbling cauldron has been pushed a boulder — the post-9/11 war against terror. The Islamophobia this has generated globally has been grist to the Hindu communalist’s mill too.

I have argued in my book “Being The Other: The Muslim in India” that calling a spade a spade at the very outset would have minimised the social disharmony that has plagued us for 71 years. From day one we should have declared ourselves a Hindu state. This would have obviated the need for an unsettling, double-distilled Hindu Rashtra or Hindu Nation. The Hindu in this “raj” would have been at the steering wheel but the minorities would have struck a stronger bargain for education, seats in Parliament, jobs in the cabinet, Civil Service, Police, Armed Forces and so on.

Detractors raise a howl of protest. How can a theoretic state be secular?

In the recent elections in Pakistan, three Hindus — Mahesh Malani, Hari Ram Kishwari Lal and Giyan Chand Essrani — won from general seats in Sind, one for the National Assembly and two for the Provincial Assembly.

The fact that Britain is a Protestant monarchy did not come in the way of Sadiq Khan serving as London’s high profile Mayor. Last year Donald Trump banned travel to the US from several Muslim countries. He was therefore not accorded a “state” visit to Britain because in that event protocol would have involved the Mayor of London. Saving Sadiq Khan this embarrassment was important enough for the organisers to deny Trump a state banquet with the Queen.

The Home Secretary Sajid Javid may not be a practicing Muslim but he is there high in public profile to make a bid for the top job. Two years ago when I watched a Test match there were four Muslims in the English cricket team. I have met doctors, teachers, civil servants, entrepreneurs from the subcontinent, both Hindus and Muslims, thriving. The Anglican Church never came in their way. In India’s circumstances in 1947, a Hindu India may have been better, than the one cloaked in a hollow and bogus secularism where the police watch on as one Muslim (or Dalit) after another is lynched, some to the accompaniment of expert photography.