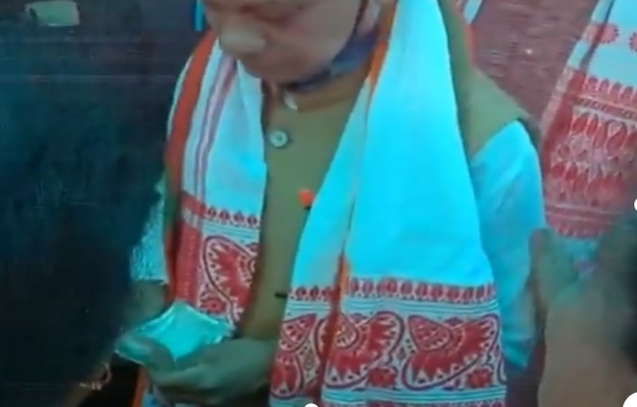 New Delhi: Amid the allegations of gross violation of Model Code of Conduct by the ruling BJP in Assam, a sitting party MLA was caught red-handed  while allegedly distributing money to prospective voters in the state which will vote for the 39 constituencies in the second phase on Thursday.

The sitting BJP MLA Ramakant Dewri caught on camera distributing money ahead of phase II polls who is contesting the Assam Assembly election from the Morigaon constituency, which will go to the polls on Thursday.

In the video that has gone viral on social media on Wednesday, Dewri can be spotted distributing money to a group of women.

Dewri was elected to the assembly on a BJP ticket from Morigaon constituency in the 2016 election defeating his Congress rival Jonjonali Baruah by 29623 votes. His past is also not unblemished. In 2017, he ran into a controversy after a purported sex tape featuring Dewri went viral in the Marigaon constituency. He had denied his involvement in the video and said he would resign if forensic tests showed his involvement.

However, the BJP-led alliance felt the heat of public ire as party leaders in their desperation using all sorts of unethical means to win loyalties of voters. The BJP had released a highly objectionable advertisement after the first phase of election in major Assam dailies that forced the Election Commission to issue notices to the nine guilty newspapers after the Congress petitioned to it.