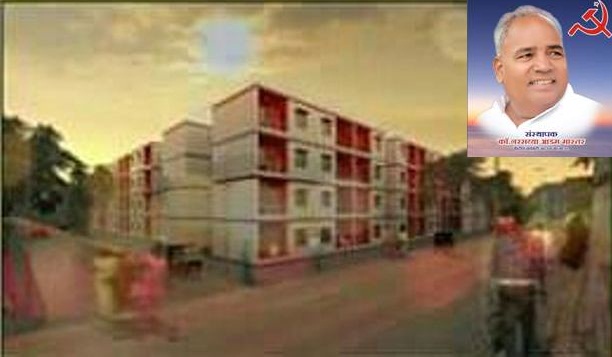 SOLPAUR: – Getting a one BHK flat in a well planned township is a dream comes true for those families of minority communities who could have never thought of owning a house in this age of inflation.

A housing project under the Pradhan Mantri Awas Yojna consisting of 30,000 residential units is underway at Solapur, Maharashtra.

After a continous struggle of 3 years the project file was presented for approval before the Urban Development Ministry’s CSMC committee on 26 May 2016 and it got approved in a very short time.  The flats are expected to be handed over by 2022. Muslim applicants in this project are about 19,000.

On 25th July Comrade Narsayya popularly known as Adam Master was felicitated by the beneficiaries. He was elected MLA twice from Solapur constituency wherein 38% Muslim voters play a key role.

The housing scheme was launched UPA government under Rajiv Gandhi Awas Yojna to provide basic amenities to the economically disadvantaged families and laborers.

During a candid conversation with MuslimMirror.com this fire brand leader said that “Sushil Kumar Shinde and former CM Prathvi Raj Chavan of Congress are fully responsible for delaying this project.” 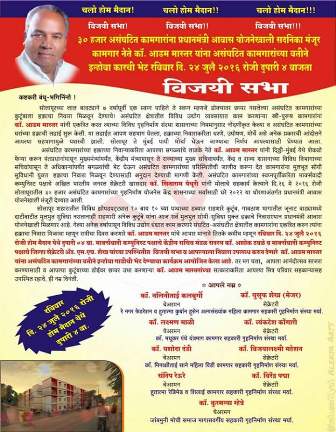 “Ex-cabinet Home Minister Sushil Kumar Shinde didn’t like this project. He put all his efforts to stop it, because he felt that if this project got sanctioned from the state government then Muslim voters will turn to me and this will be a big problem for his daughter Praniti Shinde to become MLA for the second time from Solapur Central constituency. Finally former congress led state government approved only 50000 per house while we were demanding 1, 50,000. This was nothing but dirty politics. This hurdle and one and half year delay caused a very huge loss to us now we have to manage 750/- crores rupees  through bank loan.”

He praised Chief Minister Devendra Fadnavis for cooperating and sanctioning the project within four days.

Saleem Mulla a CPM activist said that “we scrambled day and night with our leader to achieve this goal. We had to visit Delhi dozens of times. Now Alhamdulillah we are victorious and are setting up a national level record in launching such a venture.”

Irfan SM ,a very close aid of Adam Master  said that “political leaders like Adam are very helpful in maintaining the secular fabric of our nation. He has emerged as a true friend. Even though he lost 2014 assembly election, he kept working on his dream project and finally got it done”.