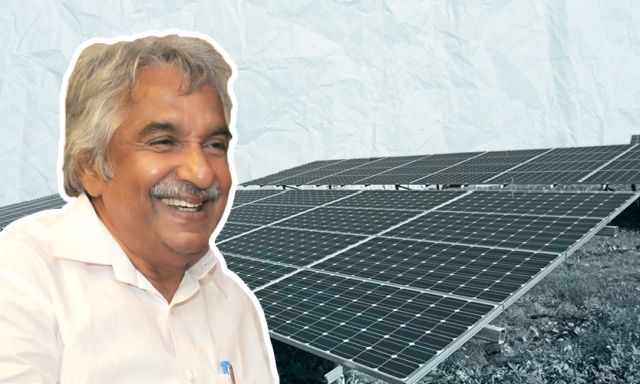 Thiruvananthapuram : The Kerala government on Wednesday decided to initiate a criminal and vigilance probe against former Chief Minister Oommen Chandy and several others in what is known as the Rs 7 million Solar Scam case.

Besides Chandy, the probe would also investigate his former cabinet colleagues, a former Union Minister, legislators, other Congress leaders and then senior police officers.

The allegations regarding the multi-crore solar energy investment fraud that rocked the Chandy government in 2013 were led by Saritha Nair and her live-in partner Biju Radhakrishnan. Nair had alleged she was sexually exploited by several political leaders.

The Pinarayi Vijayan government also decided to initiate a sexual harassment case based on her letter against all those named by her.

All those named in the case belong to the Congress, except for Jose K. Mani of the Kerala Congress (Mani).

The probe decision was announced by Vijayan after the weekly cabinet meeting on Wednesday, based on the recommendations of the Solar Scam Commission report submitted by Justice (retd) G. Sivarajan in September.

“The 1,723-page report in four volumes was handed over to the Advocate General and Director General of prosecution for their legal opinion.

“We decided to accept their recommendation and have decided to initiate criminal and vigilance cases as it has come to light this was a fraudulent business and … bribes were given.

“Another case based on the letter by Saritha that she was sexually exploited will also be registered as receiving money and sexual favours are equally culpable.

Vijayan added that a Special Investigation Team led by Director General of Police Rajesh Diwan had been set up to investigate the cases.

The case broke out in June 2013 during Chandy’s rule (2011-16) after reports surfaced that three staffers in the Chief Minister’s Office had contacts with a couple who cheated many investors of money after promising to supply solar panels to them.

The Commission was appointed by the Chandy government in October 2013 under pressure from the then Left opposition.

While Saritha Nair is out on bail, Radhakrishnan is still in custody after it came to light that he had murdered his first wife.

Reacting to the development, Chandy said it would be dealt with legally and not the way the CPI-M did it when cases were registered against them.

“When we decided to appoint this Commission, a public interest litigation came up in the High Court to do away with it. But I filed an affidavit saying it should not be cancelled as the truth should come out.

“I have nothing to fear as I am guided by my conscience. I know I have done no wrong. If they feel they can finish me off through this case, they are thoroughly mistaken because I will bounce back even stronger.

“This is going to backfire on them very badly,” Chandy told reporters in Thrissur, adding it was strange that the Commission report is still kept under the wraps.

State Congress president M.M. Hassan told the media here that this is nothing but political ‘witch-hunting’

Former Chief Minister V.S.Achuthanandan, who as then Leader of Opposition (2011-16), mounted attacks on Chandy on the floor of the assembly after the scam surfaced, on Wednesday asked all those indicted, including Chandy, to quit public life for “outraging the modesty of women, corruption and abuse of power”.

Nair said she was “very happy” with the new developments. “I feel genuinely happy… All that I wanted to happen has happened. The truth will triumph.”