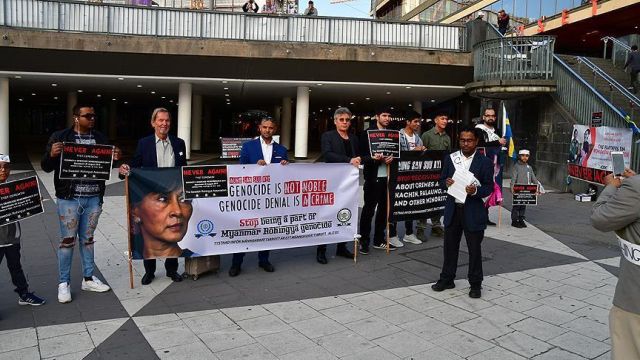 By Cansu Dikme and Sena Guler,

In a joint declaration, the solidarity groups, including the European Rohingya Council (ERC) and Free Rohingya Coalition, voiced support for the “inalienable right of Myanmar’s Rohingya ethnic minority group to self-identify as Rohingya”.

Acknowledging the verifiable, pre-colonial presence, history, identity and culture of the Rohingya in northern Rakhine, the groups recognized Myanmar’s decades-long persecution of Rohingya as genocide.

Also signed by the Centre for Human Rights Research and Advocacy (Centhra) in Malaysia, the declaration “supports the existential needs of several million Rohingya violently deported by Myanmar government in periodic waves of exodus since 1978 to secure protected return to their birthplace and ancestral homeland in Northern Rakhine”.

It called for international protection “until such a time as Myanmar is ready to accept them as full and equal citizens”.

South Africa-based Palestine Solidarity Alliance, Media Review Network, Colors of Hope and Protect the Rohingya; Bangladesh Centre of Governance and Human Rights, Cambridge University, and Burmese Rohingya Community in Australia were among the co-signatories of the declaration.

In Australia, Burmese Rohingya Community held a rally at Lakemba Memorial Park, southwestern Sydney, in solidarity with the Rohingya.

In Sweden, a group of people gathered in Sergels Torg Square to commemorate those who lost their lives in the massacre, upon the call of Swedish Rohingya Association.

They also held banners which said “Stop deceiving the world about crimes against Rohingya, Kachin, Palaung, Kokant and other minorities”.

In Canada, it is hoped hundreds of thousands will attend solidarity events to bring attention to the plight of the Rohingya.

In the U.K., a solidarity rally is expected to be held at Manor Park Community Centre, London.

On Friday, South Korean activists also marked the day by gathering in front of the Myanmar Embassy in Seoul to express solidarity with refugees.

In a written statement, the Korean Civil Society said it organized the protest “to honor victims killed by Myanmar government last year and to band together with the most persecuted people who have been denied the right to call themselves Rohingya”.

Saturday, Aug. 25, marks a year since more than 750,000 Rohingya refugees, mostly children and women, have fled Myanmar and crossed into Bangladesh after Myanmar forces launched a crackdown on the minority Muslim community, according to Amnesty International.

More than 24,000 Rohingya Muslims have been killed by Myanmar’s state forces since then, according to the Ontario International Development Agency (OIDA).