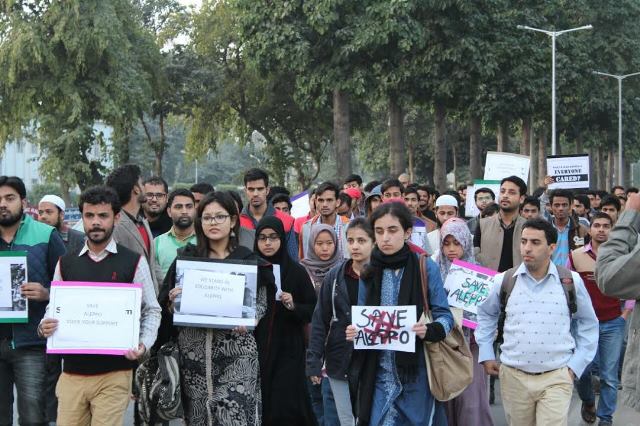 Aligarh : A solidarity march was organized in the evening of 15th December 2016 from Maulana Azad Library to Baab-e-Syed (AMU) in solidarity with the innocent victims of continued persecution in Aleppo (Syria) and ‘Rohingya’ community in ‘Rakhine’ State of Myanmar. A large crowd was gathered at Maulana Azad Library of AMU in the sorrowful evening as the massacre of humanity is going on in Aleppo (Syria) or alike, anywhere else in the world. This disturbing and continued trend of persecution has derived two young students of Women’s College (AMU) – Zahra Sherwani and Ayesha Najeeb to call upon the students of AMU to protest against killings of innocent people from Syria, Myanmar or any war or riot torn region of the world in the mere name of cast, creed, religion or ethnicity.

The massacre of innocents in Aleppo and the world at large – moved AMU students out of their homes and hostels and onto the streets, placards in hands, vehemently voicing their condemnation of the carnage. At the conclusion of the march, impassioned speeches were made by some students and they discussed the ongoing Syrian and ‘Rohingya’ crisis and they suggest possible solutions for the problem. The most important thing the students were stressing was that- the war brings nothing other than destruction and it must be stop at any cost.

Few of the students’s who contributed to make the protest successful were -Uzma Sarwat, Mahwish Zaman, Sharjeel Usmani, Afif, Mahfooz Alam and Faraz Ahmad, among many others.

The event is a testimony to the fact that the plight of oppressed of the world- whether in Syria or anywhere else in the world, continues to be in our hearts and prayers. The students of AMU stand in solidarity in dark hour with all fellow human beings – facing human rights violation in all parts of the world.