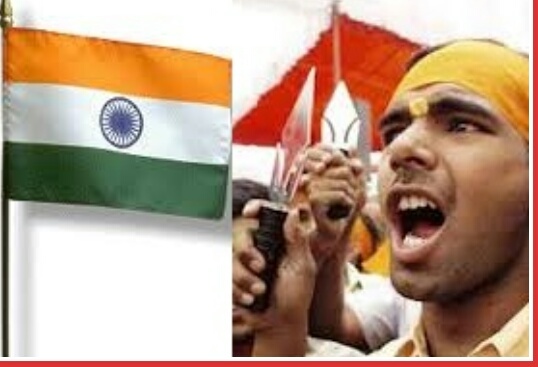 Cambridge historian Anil Seal in his monumental work, “The Emergence of Indian Nationalism: Competition and Collaboration in the Later Nineteenth Century (1971),” writes, ‘In 1857, India was not one nation, in fact there was no nation, India was a jumble mumble of societies, a graveyard of nationalities and India nationalism was yet to be born. Anil Seal attributes the birth of Indian nationalism to the British rule that incubated Indian nationalism for next hundred years and gave it as a parting gift to every Indian.

There may be some who may disagree with Anil Seal’s thesis but it seems in contemporary India this is a hot currency. The current rulers are reaping rich dividends of this gifted nationalism and peddling it in a new flavor that is ultra-nationalism.

The ultra-nationalism is being preached and practiced at its splendid best during the current regime. Those at the helm of power are projecting ultra-nationalism by bringing Hindu militancy into sanatam dharma. In the quest to glorify Hinduism they are targeting the helpless Muslim minorities, crushing the democratic norms and a doing a host of other things that bemoan India sliding towards a failing welfare state.

This is how India’s churning process is going on. There are two distinctive trends that is vividly being witnessed are the new political and social agenda of the ruling dispensation. The political agenda is the project Hindu Rastra and the social agenda is to purge the Muslims and suppress them to the extent that they convert their faith into Hinduism. The other notable features of the churning up are as follows:

Cinematic art is being used to glorify the lost-golden age of Hindus. There is distortion of history in Indian cinema and manufacturing of Hindu glory. Common themes in current Indian movies are hate against Muslim rulers and glorification of Hindu rulers.

This ultra-nationalism is emanating from the ruling party’s head that is Prime Minister Modi. Modi who has now come to symbolize as India is Modi and Modi is India. Any criticism of Modi is considered an attack on the prestige of the nation.

Then the ultra-nationalist is using Islamophobia and bigotry against Muslims as its twin weapon to hold the sanatan dharmist under its umbrella. This recipe is working well in India and demonizing Muslims is the best bet to flag the cause of ultra-nationalism.

Suppression of freedom of expression is another facet of the churning out process currently underway in India. Criticism of the government is taken as an attack on the nation. If anyone dares to criticize the ruling party, he/she is called anti-national. As such the word anti-national has become most fancy in today’s lexicon. Any dissent has to be suppressed as anti-national and its punishment is under the sedition and treason laws.

Most of the news media are directly or indirectly controlled by the ruling party. In India, Media has to glorify the ill-conceived policies of the government or have to face its punitive wrath. The fourth estate is under the tutelage of the government that is holding the largest democracy of the world at its mercy.

After Muslims, the labor force is the most suppressed entity in this country. Under the neo-capitalism paradigm, the labor force is seen with disdain. The present is making all attempts to suppress the labor forces and they are rendered completely helpless. The current government does not know the power of organized labor movement that has toppled many such power drunken regimes in the world.

In sum, the executive, the judiciary, the bureaucracy, the police, the army, the media, the education system, some professionals are all part of the churning process that India is facing today. They are not just individuals who responsible for the cancerous growth in India’s body. The imprints of churning up have permeated deep into the entire state apparatus.

Well these are some of the inchoate images that are at work to change the nature and character of India. In this changing India, many Indian are in a state of despair dejection and suffocation. They do not know how to deal with the fascist forces that have taken over the country.

There is wide spread protests seen all over India as the fascist forces are hell bent to change the nature and character of the country.

The only ray of hope in such moments of despair is the ordinary people of this land. The common masses have raised a standard of revolt against those who are propagating the fascist ideology to make India a Hindu state.

The common man is undeterred by the state repression and is fighting tooth and nail to protect the fundamental character of India. They are vociferously opposing this fascist regime and have come on the streets in large numbers opposing this repressive government.

As the Hindu India is galloping on the bosom of modern India, the burden of hope rests on the shoulders of the common Indians. They are kindling the hope that hard earned Indian nationalism helped Indian gain freedom from the foreign rule should not be surrendered to few thugs who are using ultra-nationalism to remain in power.

In these moments of introspection, as Indians we first need to recognize these disturbing trends unfolding before us. Then we need to organize to oppose the fascist policies of the current government and stop such ill-conceived churning process. As Indians if we are not going and arrest this slide, India will soon be bracketed as failing welfare state.