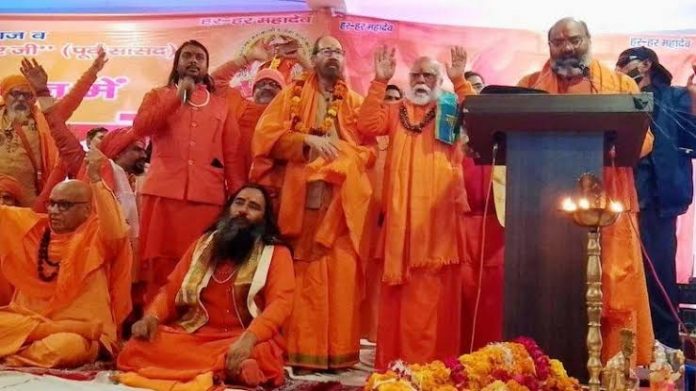 New Delhi: In accordance with a Supreme Court order dated January 12, 2022, one of the petitioners, Qurban Ali, sent letters to local authorities in Uttar Pradesh, Uttarakhand, and Himachal Pradesh on Friday, requesting that a public event styled as “Dharama Sansad” not be held in their respective areas. More events, according to the petitioner, are being organised, with the prospect of inflammatory statements directed at the Muslim population.

The letter was written to the District Magistrates of Aligarh (UP), Haridwar (Uttrakhand), and Una (Himachal Pradesh), indicating the possibility of hosting the so-called ‘Dharma Sansad.’ It was noted that Hindutva leaders from the “Dharma Sansad” had announced a protest on January 16 in response to a FIR filed against them for delivering hate speeches.

Speaking with Muslim Mirror, Qurban Ali, a senior journalist, Ali, said the Supreme Court’s decision on their petition, noting that the court advised that if such event is planned, the petitioners are free to make a representation to, or bring it to the attention of, the pertinent local authorities.

I have made this appeal to respective state authorities on the recommendation of the Supreme Court because assembly elections are happening in two states, namely UP and Uttrakhand, and communal groups want to take advantage by inflaming religious tensions, he added.

The letter forwarded to DMs mentioned the case titled Qurban Ali and Another. v. Union of India & Others Writ Petition (Civil) No. 24 of 2022 pending before the Supreme Court of India

“As you may be aware, a public event styled as a ‘Dharam Sansad’ was held in Haridwar, Uttarakhand and Delhi from December 17-19, 2021 where speeches were made exhorting Hindus to take up arms and embark upon a mission of ethnic cleansing of Muslims in the manner undertaken in Myanmar. The speakers called variously for economic boycott of Muslims, for investment by Hindus in heavy arms and called upon Hindus to be ready to kill and be killed for the establishment of a Hindu rashtra…” stated the letter.

“We believe if such events are held in the State of Uttarakhand as well and similar speeches are made, it will not only disturb the public order but will amount to various criminal offences as outlined above,” the petitioner said.

While referring the Supreme Court judgement in Tehseen Poonawala v. Union of India case, he said the State Government was directed to appoint nodal officers in each district for taking measures to prevent incidents of mob violence. These nodal officers have not been appointed in the State of Uttarakhand.

The letter also underlined the ongoing elections in the above mentioned two states, stating that “while we do not want to attribute motives to any person, but if such speeches are made in the midst of an election, they will destabilize the social order and have serious consequences on the polity of this country”.

“We request you to take such preventative action within your powers as is necessary, including under Section 144 of the Criminal Procedure Code, 1973 and Sections 3 and 5 of the National Security Act, 1980”.