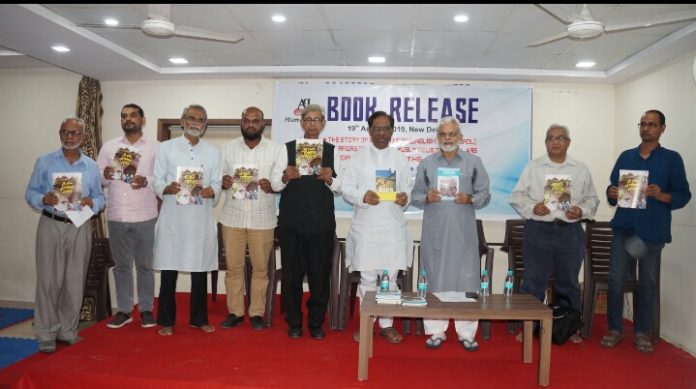 New Delhi : “The Story of Babri Masjid” (Babri Masjid ki Kahani), a pictorial history book in English, Hindi and Urdu was released in a function organised by the publishers, Aternate Press in New Delhi. This book is being published at a time when Ayodhya case arguments are progressing in Supreme Court. Though this book with cartons and narrations is primarily meant for children, it is equally aimed at the new generation who are born after the demolition of Babri Masjid.

In the book release program along with the above title, two other relevant books namely “Warriors of Malabar: Muslim Religious Scholars” (English) and “Badr: Lessons of the Battle” (English) were also released.

Advt. A. Mohammad Yusuf introduced the book on Babri Masjid. The other two books were introduced by E.M. Abdul Rahiman. He also paid tribute to the author of the book Badr A. Sayeed who has passed away a few months back.

While delivering his presidential address, A.S. Ismail, the Managing Director of Alternate Press stated that in the context of efforts of rewriting the history by the fascist forces, these books are aimed at creating awareness among the youth towards the real history of the country and their forefathers.

Popular Front of India Chairman E. Abubacker while expressing his views on the books said that we should never let the memories of Babri Masjid vanish from the minds of people. “The three books are most relevant to the contemporary situations of this country and I hope the efforts of all those who are behind this work, will bring fruits”, he said.