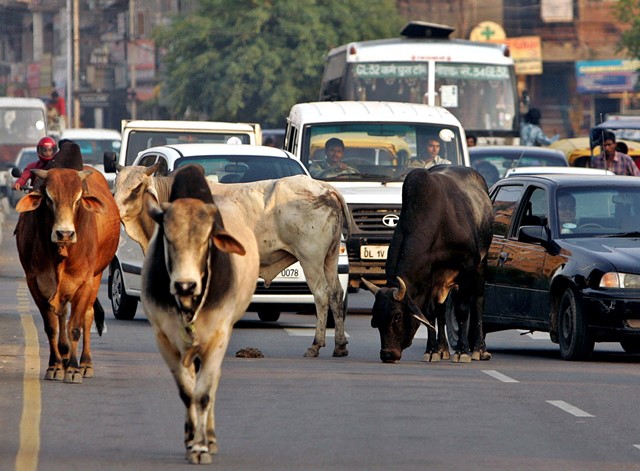 Hon’ble Gujarat High Court has exhorted authorities for a permanent solution of cattle menace through involvement of cattle owners (TOI, Ahmedabad, September 26). Police officials have been activated to the extent of asking people not to feed these stray cattle on roadside. Cattle owning Maldhari community has, however, reacted sharply and insisted on forming groups for different Police Stations so that Cops may be lead to these communities in order to persuade them to refrain from letting their cattle loose on City Streets/Roads. Earlier also Hon’ble HC has issued strict orders to keep Cities like Ahmedabad and Gandhinagar free from stray cattle. It was observed that even after such strict HC orders cattle had a field day in these big cities.

Rising menace of stray cattle has resulted in an unprecedented increase of fatal road accidents. It is very difficult to bring the vehicle, especially in case of trucks, to a dead stop when cattle are spotted squatting on highways in a group. Number of such accidents has been reported particularly for night operating transport or Private vehicles.  Punjab Gau Seva Aayog, an organization for Cow care and protection, has cited 300 deaths on road due to stray cattle in two and half years and sought help from Punjab State government in bringing these stray cattle in Cow Shelters (http://www.india.com/news/india/300-killed-in-road-accidents-in-past-2-5-years-due-to-stray-cows-punjab-gau-seva-aayog-2042699/). Two wheelers are especially vulnerable to fatal road accidents caused by stray Cows. In some cases pillion rider have succumbed to injuries faced when thrown out on road due to sudden impact in such accidents. Stray Canines are not as big a problem as stray Cows because being sacred they can’t be touched and hence they have developed immunity to honking of horns. After strict ban on Cow and Cow progenies slaughter, their number on our roads is steadily increasing. As owners of these cattle cannot sell these animals when they become unproductive, they are left with no option but to let them loose. Evidence of this can be have from increasing presence of Cows on our roads in night. Sometimes these poor abandoned Cows are treated inhumanely when they dare to have a mouthful in farmlands. Throwing acid on unsuspecting stray Cows’ udder has also been reported.

In Gujarat harm done to Cows may attract criminal procedures amounting to even life imprisonment. Recently, four Muslims were arrested in Gujarat when a dead Cow was found in the vicinity of their house (http://www.hindustantimes.com/india-news/four-muslim-men-held-for-allegedly-killing-a-cow-in-gujarat-say-police/story-obPvQ09SNpRj0HzQQIbb0O.html). Twenty three people were killed in so-called Cow vigilantes attack on 32 Muslims since May 2014 (http://timesofindia.indiatimes.com/india/cow-terrorism-killed-23-since 2014/articleshow/59378467.cms).

Ironically, number of Cows is dying due to neglect in Cow shelters run by those who supposedly worship these animals. A large number, namely 200, of Cows have died in a Chhattisgarh shelter run by a BJP leader (http://www.asianage.com/india/all-india/190817/200-cows-die-in-shelter-run-by-bjp-leader.html). The dead Cows could not be buried in trenches surreptitiously dug for the purpose as the local Sarpanch spotted the activity. Reportedly, skin and bones of these hapless animals, which might have died due to lack of fodder, were sold to traders. Over 700 cows died in Cow shelters in Rajasthan due to incessant rain (http://www.hindustantimes.com/jaipur/heavy-rain-kills-700-cows-in-rajasthan-s-jalore/story-fhErzj3v2Yh9zkU8IR8V8I.html).

Government should come out with data of increasing menace of stray Cows on our road in recent years and number of Cows dying due to lack of fodder. Owners who have drove out their beloved Cows, in face of poverty and a choice between feeding their own kith and kin and domesticated Cows, should be identified. As a matter of fact, we don’t see stray Buffaloes on our roads, obviously, because of their economic viability.

Automobile owners paying road taxes have a right of way and this should not be usurped by stray Cows. Government needs to come out urgently with a solution instead of glossing over this increasingly decadent situation on our roads/highways. Lynching by so-called Cow vigilantes has not stopped even after assurances from higher executive officials. Contrarily, so-called Cow vigilantes have been emboldened in view of lukewarm approach of prosecution and till date hardly any one of them has been convicted.