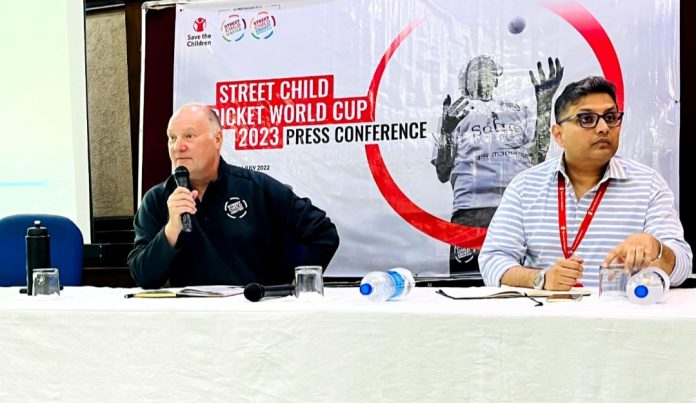 New Delhi: Save the Children India – Bal Raksha Bharat along with partner organization Street Child United, announced the seven teams that will represent India at the Street Child World Cup in 2023.

Briefing  the details about the World cup at the Press Club of India here, the organisers said  the event will give the most vulnerable children across the globe the chance to represent their countries and tell the world ‘I am somebody’.

In 2018 the United Nations General Assembly (UNGA) adopted a resolution on Sport as an enabler of sustainable development; recognizing that sport has the power to change perceptions, prejudices, and behaviors, as well as to inspire people, break down racial and political barriers, combat discrimination and defuse conflict.

The Street Child Cricket World Cup 2023 will bring together street-connected children from across the globe to advocate for their fundamental human rights – identity, access to education, protection from violence, and gender equality. The event will create a lasting legacy, shifting negative perceptions and creating positive change in the lives of street-connected children worldwide.

Young children from non-profit organisations Bucket List, CHETNA, Hope Kolkata Foundation, Karunalaya, Magic Bus, Pro Sport Development and Salaam Baalak Trust will play against each other in a designated group stage to determine who will represent team India in the knock-out phase of the tournament.

The unique ten day event will see street-connected children & young people from around the world take part in a mixed-gender cricket tournament. The teams will play the game in the Street-20 format, designed to remove many of the barriers to participation.

Each match is six-a-side, with equal numbers of girls and boys on each team. In all, 23 teams from 17 countries will take part in the event, which India will host ahead of the ICC World Cup. In addition to cricket, the young people will also participate in a festival of art and a child-friendly Congress, all designed to advocate for the rights of street-connected children globally.

Announcing the teams, John Wroe, CEO, Street Child United said, ““Across the world, street-connected young people live on, work in or are at risk of the streets. These young people are often stigmatized, mistreated, and marginalized. Their voices are rarely heard.

The Street Child Cricket World Cup uses the power of sport to provide a global platform for street children to be heard, so they can receive the protection, support, and opportunities that every child is entitled to.” Anindit Roy Chowdhury, Chief Programmes Officer, Save the Children India added, “The Street Child Cricket World Cup (SCCWC) coming to India is an opportunity for our country to host one of the largest platform for street connected children not just to play the game, but also make their voices heard.

As participants in the SCCWC, some of the most vulnerable children across the globe, by virtue of the organisation they represent from their countries, will have a chance to represent their nation and tell the world about their existence and ask for their rights.

SCCWC will create a platform for participating teams to speak about the issues and challenges that are most relevant to them and how governments, businesses and communities can support street connected young people to contribute to the UN Sustainable Development Goals”.

The event will have a central focus on ‘identity’ and the access to services that come with a formal ID and/or birth registration. Save the Children through one of its largest interventions – Making the Invisibles Visible aims to create an enabling environment for all children living in street situations in India, thereby strengthening their access to the right to survival, development, participation, and protection, eventually unlocking their limitless potential.

The SCCWC 2023 will be the second edition of the tournament following the success of the inaugural event in London/Cambridge 2019, where eight teams competed, and Team India South emerged victorious after beating hosts England in a highly competitive final. The winners will return in 2023 to defend their title alongside seven other teams from India who will represent organizations from across different regions of the country. They will be joined by teams from Bangladesh, Bolivia, Brazil, Burundi, England, Hungary, Mauritius, Mexico, Nepal, Rwanda, South Africa, Sri Lanka, Tanzania, Uganda, and Zimbabwe.