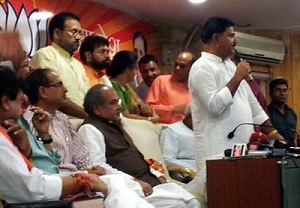 Bhopal, July 12: The ruling Bharatiya Janata Party, (BJP), in Madhya Pradesh, sulking after the Raghavji episode wherein its Finance Minister was forced to quit following sodomy charges, pulled a sort of coup on Congress, the main Opposition party in the Madhya Pradesh Vidhan Sabha, by welcoming senior Congress leader and Deputy Leader of the Opposition Chaudhary Rakesh Singh Chaturvedi into its fold with great enthusiasm.

The BJP committed this act of opportunism after Congress leader Rakesh Singh Chaturvedi punctured his party’s no-confidence motion in the state Assembly by opposing it even before it could be moved and debate initiated. The monsoon session of the 13th assembly, was adjourned sine die on Thursday, amid heated debate over no-trust motion’s legality, has raised some serious questions. The opinion of the members was not sought on Parliamentary Affairs Minister Dr Narottam Mishra’s proposal to adjourn the House sine die and it was done amidst stiff protests by the opposition members.

Also, the rule that a no-trust motion supported by at least ten percent of the members present and voting in the House will be accepted, was ignored after Congress MLA Rakesh Chaudhary expressed his objection on the no-trust motion.

Immediately after Leader of the Congress Opposition Ajay Singh was called upon by Speaker Ishwar Das Rohani to speak, Rakesh Singh Choudhary, Deputy Leader of the Opposition, sprang to his feet and started disputing his own party’s No-Confidence Motion. He said he did not agree with the motion on two grounds: one, it ignored the case of former Finance Minister Raghavji altogether and two, a recent tweet allegedly by Congress general secretary Digvijay Singh—”Baccha Baccha Ram Ka, Raghavji Ke Kam Ka”—was an insult to all Hindus. He said 80 per cent of us are Hindus, and it is an insult to Madhya Pradesh and an insult to all children.

The BJP benches, thereafter, started calling out for the name of the author of the Twitter message, but Chowdhary Rakesh Singh refrained from naming the person. BJP leader Narottam Mishra, who obviously was at the helm of this political engineering, spoke next: “The Leader of the Opposition does not have the confidence of his own party. I would recommend, rather than tabling a no-confidence motion against the BJP government, Ajay Singh should first go and earn that for himself from his own party leaders.”

Rakesh Singh alleged that he wanted some changes in the no-confidence proposal. He said that 721 pilgrims from Madhya Pradesh were still missing in Uttarakhand and the Congress needed to bring that up too. Then he added: “I am a Hindu by birth when I saw an offensive tweet about Ram and Raghavji, it hurt my religious sentiments. I request that the Raghavji issue be discussed as part of the no-confidence motion and also that the former finance minister’s immoral acts should not be used to insult the children of Madhya Pradesh.” He further said that he did not believe in the no-confidence proposal as presented by the Congress opposition.

Knifed in the back

Later, inside the MP Vidhan Sabha, speaking to media persons, Rahul Singh said, “We have been knifed in the back by one of our own.”

Blaming chief minister Shivraj Singh Chauhan for the incident, he said, Chauhan engineered this to avoid a discussion on charges against his near and dear ones.

Meanwhile, an hour later, Rakesh Singh Chaturvedi was in the BJP office flanked by chief minister Chouhan, his cabinet ministers and the state BJP chief. He will now contest the upcoming November polls on a BJP ticket.

Chaturvedi announced his decision to join BJP at a press conference. He said he had spoken against the no-confidence motion in the Assembly as a matter of principle and maintained he could not compromise with his ideology. He said he would work with total devotion for BJP in the state which is to hold Assembly elections by the end of this year. His father, Dilip Singh, had been elected to the state Assembly on a BJP ticket in 1980.

Chaturvedi’s departure is being seen as a setback for Congress, which has lost the last two Assembly elections (2003 and 2008) in the state. (pervezbari@eth.net)