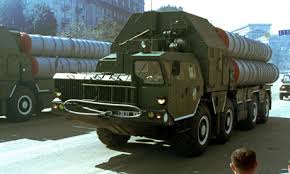 Assad made the remarks during an interview with the Lebanese al-Manar TV, Xinhua reported.

The president said other shipments of the anti-aircraft missiles will be delivered soon.

His comments came a couple of days after Russia’s Deputy Foreign Minister Sergei Ryabkov said that sending long-range S-300 anti-aircraft missiles to Syria constitutes “a stability factor” and prevents foreign forces from interfering in the country.

He said the shipment was being carried out according to a contract signed between Syria and Russia five years ago.

On Israel’s air strikes against Syria’s army positions in the capital Damascus, Assad said the Syrian army will retaliate.

In the interview, Assad said his army was fighting more than 100,000 fighters of various nationalities.

The president also said his government would take part in an international conference on Syria slated for June.

Syria has been locked in a civil war since demonstrations broke out against the Assad regime in March 2011. According to UN estimates, some 80,000 people have been killed in the conflict.—IANS.