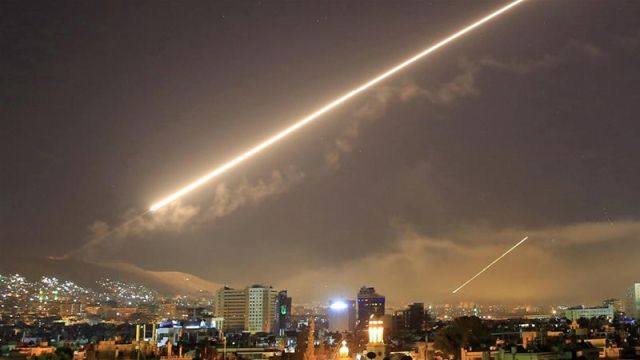 Damascus : The Syrian air defences were triggered on Tuesday evening to a heavy Israeli missile attack that targeted areas in the countryside of the capital Damascus, media reported.

The Israeli attack was carried out from inside the Lebanese airspace, said the state TV, adding that the air defences have intercepted a number of missiles, some of which were intercepted while over Lebanon.

The residents in Damascus heard a series of explosions in the capital and saw the flaring air defence missiles chasing targets in the sky, Xinhua news agency reported.

Meanwhile, Lebanese reports said Israeli warplanes infiltrated the Lebanese airspace on Tuesday evening at the time of the attack.

The official media outlets haven’t given details about the targeted sites, but said the air defences were responding to the attack over the western countryside of Damascus.

For its side, the Syrian Observatory for Human Rights war monitor said that the Israeli missile attack targeted areas in the western and southwestern countryside of Damascus.

It said a number of missiles hit three targets, which it claimed are weapon depots that belong to the Lebanese Hezbollah group.

The Israeli attack is the latest in a string of missiles strikes targeting Syrian positions throughout the crisis over the pretext that they are targeting positions of Iranian-backed forces and allied Hezbollah fighters.

The last attack was late last month and targeted military positions in the town of Kisweh in the western countryside of Damascus.

In September, Moscow equipped Damascus with the S-300 air defence missile system, but local reports said that this advanced system hasn’t been used yet.