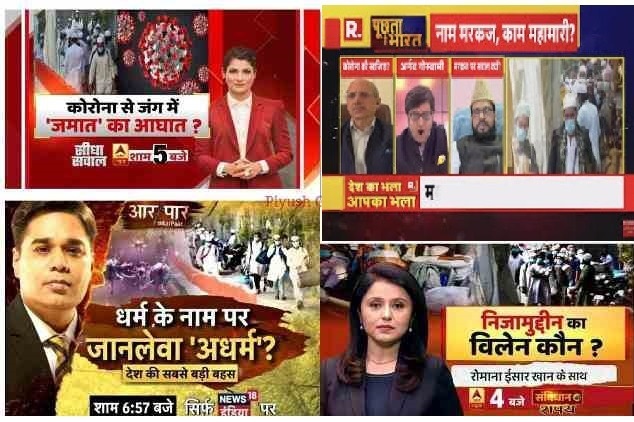 New Delhi: The Supreme Court on Tuesday expressed strong displeasure on Centre’s affidavit in a case related to media reporting on a Tablighi Jamaat congregation during the onset of Covid-19 pandemic.

The top court asked the Centre “to consider evolving a mechanism to address issues with content on TV, or else, the court may entrust it to an outside agency”.

A bench headed by Chief Justice S.A. Bobde told Solicitor General Tushar Mehta that the court is not happy with Centre’s affidavit in the matter, as it skirts what powers government has under the Cable TV Network Act to hear such complaints.

The bench asked the Centre to specify how Cable TV Network Act can be used to control the content of Cable TV network.

“Your affidavit is silent on it. The other issue, what steps you can take to deal with such complaints.

“The mechanism — your affidavit is silent on it. Please put all these in your amended affidavit. You (the Centre) have the power under the Act,” added the bench.

The Chief Justice told the Centre why should the court refer to NBSA (News Broadcasters Association), and others, when the Centre has the authority to look into it.

“If it does not exist, then you create an authority, or else we will hand it over to an outside agency,” added the Chief Justice.

The top court has asked the Centre to inform it what mechanism is available under the Cable TV Network (Regulation) Act and what action can be taken against fake news in three weeks.

In August, the Supreme Court, during the hearing of the plea by Jamiat Ulema-i-Hind, which cited the demonising of the minority in connection with the Tablighi Jamaat congregation by various media organisations, had said the governments do not act till we direct them to.

The top court had suggested making National Broadcasters Association (NBA) a party in this plea. The Press Council of India (PCI) counsel had contended before the bench it has taken cognizance of 50 instances of false reporting.

The counsel for NBA said it had received around 100 complaints.

The top court noted that it would need assistance from expert bodies on this issue and sought reports from NBA and PCI. Jamiat’s counsel had contended these bodies merely play an advisory role and if there is any action then the government can only take it.

The pleas filed through advocate Ejaz Maqbool said: “By communalising the issue and demonising the entire Muslim community, the actions of the media pose a serious threat to the life and liberty of Muslims across the country. The demonisation is also an infringement of the right to live with dignity which is also covered under Article 21 of the Constitution.”