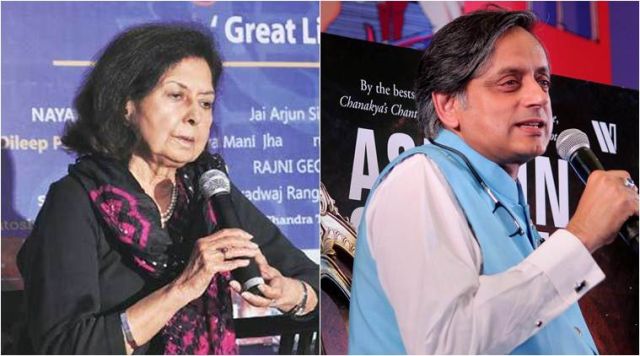 Jaipur : The third day of the Zee Jaipur Literature Festival witnessed several hard-hitting sessions that addressed the burning issues of nationalism and Hindutva in the contemporary scenario. With acclaimed writers Shashi Tharoor and Nayantara Sahgal leading the charge against what the latter called “Sanghiwadis,” a lot of the day’s happenings on Saturday revolved around Hindutva, and more so reclaiming Hinduism.

Tharoor addressed as many as five sessions during the day and while most of them were themed on literary aspects, the last session of the day was based on his latest book “Why I Am A Hindu”. In conversation with Arundhati Subramaniam, the Congress MP from Thiruvananthapuram waxed eloquently on his idea of Hinduism, which, according to him, is what most Hindus believe in.

“To my mind, most of the people I know are unapologetic about being Hindus and they do not believe in belittling the faith of others. Today it is high time that we take back Hinduism from them. Even some of the greatest of our thinkers like Swami Vivekananda did not believe in what they are practising today.

“I don’t know how such a liberal faith as ours has been reduced to such low but I certainly don’t want to have a part in it,” he said during the hour-long session, which ended with evocative phrases from his book like “Garv se kaho main Hindu hoon” (Say proudly that I am a Hindu) and “Main Garv se kehta hoon ki main Indian hoon” (I say proudly that I am an Indian).

Tharoor said that the current government does not want “unity in diversity” but “uniformity” and that, to his mind, is a sign of dangerous times.

“If people are going to burn effigies and attack buses of school children just to prevent somebody from expressing his creative freedom, that is something to worry about. Hindutva is like Hindu wahibiism. It is high time that those of us who are better Hindus than them reclaim Hinduism,” he added.

Acclaimed writer and a member of the Nehru-Gandhi family, Nayantara Sahgal, reinforced her sustained attack on the “ideology of Hindutva,” dubbing it an extension of Hitler’s and Mussolini’s philosophy, while also emphasising that the country’s Dalit movement is the “strongest and most organised voice” against the current trials of time.

“When the atmosphere in the country is what it is today, there are only two options: One, to get drunk and the other to write a novel and that’s what I have done,” she said. Sahgal’s last novel “When The Moon Shines By Day” is a satire on an age when there are acute restrictions on freedom of expressions as characters in the novel come face-to-face with subjugation by the state.

“It seems to me that the Kshatriya mentality has taken over the country and is trying to decide what we do. I sense a very war-like situation in the country, not only with Pakistan but also with internal enemies,” she said, before describing that the internal enemies are “others” — those who disagree with the current dispensation.

Responding to an interjection from an audience member, she contended that “Hindutva is a problem to me because I am a Hindu. I am not only a born Hindu and practising Hindu. We rejected a religious identity at Independence because we are a deeply religious society of many religions. Our founding fathers ensured that the practitioners of every religion have pride of place in the country”.

“Under that banner of Hinduism, attacks are carried out on freedom of expression. Scientists, artists, filmmakers and everybody who do not agree with them are attacked and killed,” she added.

(Saket Suman is in Jaipur at the invitation of the organisers of Zee Jaipur Literature Festival. He can be contacted at saket.s@ians.in)