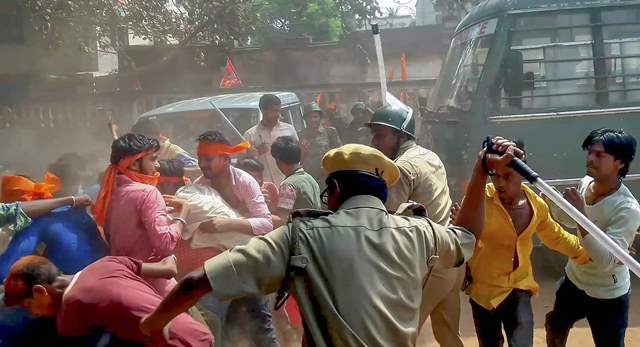 Kolkata, April 16 (IANS) Ten people have been arrested in connection with violence after a Ram Navami rally in Asansol, the city with the second largest population in West Bengal, police said on Tuesday.

He, however, said the situation was now “completely peaceful” and “under control”.

“Yesterday (Monday) there was unrest in the area after Ram Navami rally. Two police vehicles were vandalised and set on fire. We have arrested 10 people for vandalism,” said Meena.

The police were probing whether all of them took part in the rallies.

“Their political affiliation is yet to be ascertained,” he said.

“This sort of situation happened last year also. Unfortunately, police and the administration never take action against these miscreants,” he said.

He said several people sustained injuries when they were beaten up by the police.

Meena said the exact cause of violence was being probed.

Mukherjee said more rallies will be taken out in and around Asansol on Tuesday.

Internet services suspended in Odisha town ahead of Ram Navami