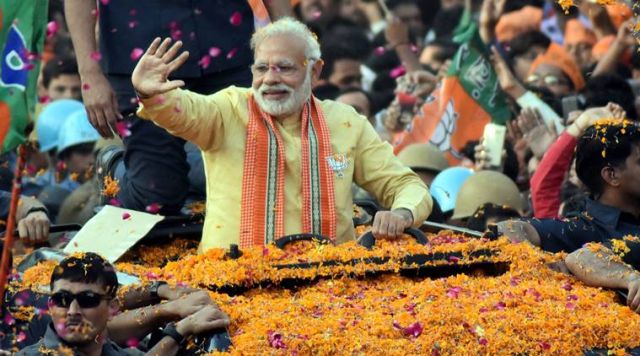 It is improbable that Prime Minister Narendra Modi is a compulsive reader of William Shakespeare. Certainly, it is unthinkable that last night he took a walk in the Ridge with Congress President Rahul Gandhi where they came across three old witches looking ‘so wither’d and so wild in their attire’, who told the latter,

‘Hail! Hail! Hail! You will be lesser than Modi and yet greater! Not so happy as he, but happier! Not king, but the father of kings!’

Before PM Modi could ask the ‘imperfect speakers’ to explain their prophecy, they vanished in Delhi’s winter smog behind one of the numerous ruins in and around the Ridge with a gory history. PM will now have to wait till the 2019 poll to find out the meaning of the riddle.

Quite obviously, PM couldn’t secure the victory that his trusted party president Amit Shah had promised – 150 seats out of 182 in the Gujarat state election. The BJP juggernaut ground to a halt at 98. The consensus earlier was that anything below 100 would be a moral and political defeat for the BJP. To be sure, the BJP rewrote with alacrity yesterday a new narrative, but the honest truth is that Shah got nowhere near what he promised.

It was not for want of trying. The BJP tried all the tricks in the trade. No prime minister in India ever before wore on his sleeve his ethnic identity and openly spoke about it to plead for votes in his home state. No prime minister ever stoked the fires of slumbering anti-Muslim feelings so daringly. No prime minister put the fear of Pakistan into the Hindu mind to frighten the voters. No prime minister ever flew a seaplane or charioted a road show on voting day to impress awe-struck natives. But PM still couldn’t get for the BJP anywhere near a political knockout he’d aimed at.

All the accolades dutifully trotted out by the obedient party stalwarts and loyal cadres cannot hide that painful reality. Yet, it was the PM’s own choice and decision to insist that the Gujarat election was a verdict of the Indian electorate on him, his humble social background and political persona, and his performance as the ruler of India for over 3 years.

Why did the Gujarat voter remain unmoved? Why did he hand down, finally, a mere token victory measured in coffee spoon, implying that was all that Modi’s party deserved? Any perceptive outside observer keenly following the election campaign could have noticed through recent weeks that the ground beneath Modi’s feet had shifted. No amount of rhetorical flourish can cover up the fact that the so-called ‘Gujarat model’ of development is in reality a myth. Beneath the surface lurks a tragic tale of deception, arbitrary rule, injustice and indifference toward the poor and the downtrodden, and of blatant crony capitalism.

Therefore, the BJP and the Sangh Parivar’s biggest loss in the Gujarat election is not that the Gujarati voter gave the ruling party a paltry majority, but that their star campaigner lost his halo. It is difficult to repackage dreams, which do not sell anymore. The merchant needs to replenish his wares.

Enter Rahul Gandhi. The fateful thing that Rahul Gandhi achieved through the election campaign was that he blew to smithereens the BJP’s so-called ‘development agenda’. He did his homework, for sure. I hadn’t known, for example, that Nano factory makes only two cars per day. Or, that not a single villager evicted out of the 1100 acres of land given away at subsidized price for the project (aside whopping financial and tax concessions) could get employment in the plant.

But Rahul Gandhi knew. He made it a point to know. As he travelled through the devastated countryside, he began connecting with the exploited, dispossessed people. He patiently listened to their unspoken sorrows at the hands of arrogant rulers. He empathized with them, consoled them, and promised justice and fair play. There was no fire in his belly. He didn’t become vituperative or spoke harsh language. In fact, he looked sad at times. He radiated sincerity and conveyed the sense that, like his mother, he too is capable of human compassion, being someone who experienced ineffable pain through life’s journey.

Amartya Sen has spoken of our multiple identities. Arguably, I too might have taken certain pride, no doubt, if Modi were a Malayali. But that is an inchoate sense of oneness and a momentary passion. When Modi appealed to the voter as Gujarati-to-Guajarati, the latter naturally found himself in an awkward spot. That largely explains the meager mandate that BJP secured in the election. Modi pushed the voter to a corner when the final countdown began. By no means is it an endorsement of the ruling party.

Modi cannot hope to extract similar emotional response in other regions of India. Of course, he still remains a charismatic figure in Indian politics. But he also carries the baggage of the dismal track record of his government. In sum, the halo has been dented – perhaps, forever. On closer look at the PM’s recent pictures and body language, one gets the impression that he realizes it, too.

Therefore, Rahul Gandhi’s appearance at the centre stage changes the matrix of Indian politics. He’s unflappable, studious and responds to the human condition in our country. Is he pragmatic enough to win over associates and make acquaintances? Yes, he is. And, yet, he is modern and has a cosmopolitan outlook and relates naturally, almost casually, with the Indian youth. Evidently, he’s in the long game.

The bottom line is that in the Gujarat election, Rahul Gandhi showed the acumen against such formidable odds for resetting the rules of engagement with Modi. In all probability, the gates of heaven were thrown open and the gods came to watch the incredible spectacle.