A relative carries a patient as another lugs an oxygen cylinder at a gurudwara in Ghaziabad, UP. Photo by Tauseef Mustafa / AFP

The Narendra Modi government, of late, has started feeling the heat of domestic media for allegedly “inept handling of the coronavirus situation” with popular newsweekly India Today running a cover story with the headline, ‘Covid 2.0: The Failed State’ – strikingly a break from the usual media depiction of India under Modi.

This was indeed a break from the past, specially of the publication which is known to toe centrist line even though many regard it “a pro-establishment media outlet”. The widely read weekly ran a chilling photograph of bodies lined up in shrouds on the cover page, holding Covid 2.0 – it also implies Modi 2.0 –responsible for the coronavirus catastrophe. 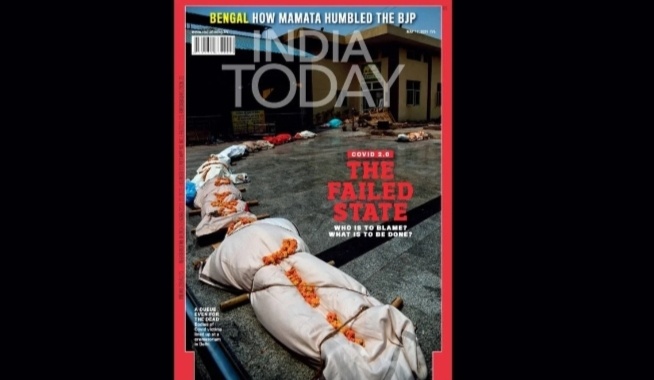 India Today carries a cover story on state failure of the government in handling Covid.

“This is unexpected of a pronouncedly pro-established media outlet to go that way. It’s rare…,” said Riaz Khan, a New Delhi-based media analyst, flashing the international coverage on coronavirus mostly holding Modi’s “demagoguery coupled with the right-wing populism responsible” for all the mess.

While Modi’s image in the global press started taking a battering in the wake of arbitrary abrogation of Article 370 and promulgation of Citizenship Amendment Act (CAA), but the servile Indian media kept “discovering in him a charismatic leadership quality who has the ability to turn the tide into his favour” even though certain section of media kept raising questions on his ability to live up to the constitutional position on account of his “nationalist harangues”.

The weekly writes, “One of the hallmarks of a democracy is accountability, where institutions outside the elected government act as checks and balances against it. Democracy does not disappear between elections. There is a moral responsibility for governing well, and if there are failures or mistakes, there must be consequences for those responsible.”

“The proposition is not uncommon, but certainly the publication is. When did you last hear any popular media raising questions on his ability?,” asks Tarique Anwar, who is working with the Newsclick, a portal whose management faced ED raids a couple of months back. He, however, noted that the “popular media cannot afford to go on” like this under the present dispensation. “Its credibility building exercise,” concluded Anwar. Noted television anchor Rajdeep Sardesai tweeted: “The worst thing we can do is in the name of so called ‘collective failure’ allow no one to be held accountable. There must be accountability down the line and it must start at the top!”

However, many journalists, including senior editor Shekhar Gupta, do not agree with the “India is failing contention”. Expressing his disagreement, Gupta writes in his portal, The Print, “As long as a nation’s own media, civil society, even individual citizens are free to bring the bad news to all, hold the mirror to the most powerful ruler in at least four decades, we are not a failed state yet.” Gupta is not alone, several journalists on social media expressed their angst over the magazine’s depiction calling it a “a sign of poor journalism”.

“Shekhar Gupta is known to have such views,” said New Delhi-based journalist A.U. Asif, who has been into the profession for nearly four decades. But the septuagenarian ruled out the accusation novice journalists levelled against him. “You can disagree with him, but you cannot say he writes under pressure or under the influence of right-wing people”. Asif, however, contested Gupta’s contentions. He added that almost all independent columnists and writers are of the view that the “democratic institutions are compromised, BJP’s IT cell dictates media”, so if these parameters, Gupta will have reverse the conclusion he drew from his own argument.

“I don’t have much to disagree with the India Today cover story. Such write-ups were carried out by different publications over the years, but the much ado is about the magazine which is known to go soft with the establishment,” said Abdul Bari Masoud, an independent journalist who largely contributes to Urdu and English papers and portals.

“The story doesn’t end with a write-up in India Today. The godi media (lapdog media) shall remain ever subservient to the right-wing government,” said a journalist working with an Urdu daily, and sardonically put, “It is a friendly push aimed at maintaining dwindling credibility of the mainstream media.”

The writer, a media analyst, can be contacted at quamar.ashraf@gmail.com

One thought on “‘The Failed State’: Irresponsible govt puts ‘Bharat Mata’ on vent: Mainstream media wakes up to Covid nightmare”