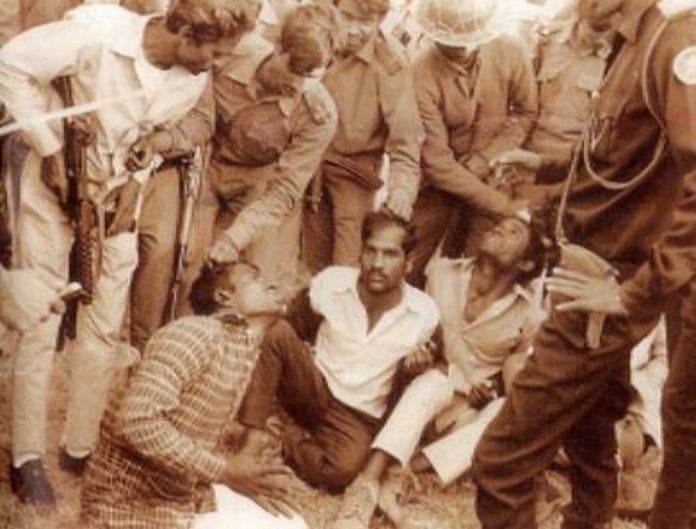 The 1948 Muslim massacre in Hyderabad state is not at all talked about in the modern Indian history discourse. It was on September 17, 1948, that the first Muslim genocide took place in Independent India. This happened in the princely state of Hyderabad and this event is celebrated as ‘Liberation Day.’

The details of the 1948 gruesome Muslim massacres are graphically described by Congress leaders like Sarojini Naidu and Ramchandra Gandhi Mahatma Gandhi’s grandson. But unfortunately, this episode of history remains the glorification of hunters are the sufferings of the hunted are kept the wraps under lock and key as unclassified documents.

In the name of “Police Action”, there was looting, arson, murder, and rape of Muslims on a very large scale on the 17th and 18th of September 1948 in the princely state of Hyderabad. This continued for several days without the world knowing it was the first Muslim genocide in independent India. It is estimated that more than 200 thousand Muslims were done to death in the genocide.  In terms of percentage, some 20% of the Muslim male population lost their life in 3 days of police action against the Hyderabad state.

It was a public outcry by Congress leaders like Maulana Abul Kalam Azad and others that forced Prime Minister Nehru to form a Sunderlal Committee to look into the horrific killing of Muslims in a cold-blooded manner.

The committee found that several armed and trained men belonging to well-known Hindu communal organizations participated in the Muslim massacre.  These were Arya Samaj and Hindu Maha Sabha workers who made the Indian soldiers identify the Muslim’s house and they targeted their property and destroyed them. The Muslim women were raped during the communal onslaught and millions of children were orphaned.

Probably, a similar kind of event was repeated in 2002 at Ahmadabad during the Gujarat riots. The only difference was in Gujarat police were on the side of the rioters in 1948 it was the Army who sided with the rioters in Hyderabad.

The BJP’s lust for taking the Muslim blood and celebrating the genocide makes them call this event ‘Liberation Day of Hyderabad.’

The question can be asked from whom they liberated Hyderabad. Was the ruler of Hyderabad not a native of India or was he an outsider like the Portuguese?

So why the word “liberation” is used in the case of Hyderabad and ‘integration’ in the case of other princely states of India?  The message is quite clear in the usage of the word ‘Liberation’ because that demands celebration. Muslims are considered an outsider in this country and the hatred towards them, make the event of integration of a princely state to be called liberation day in India.

Many princely states were integrated into India but there is no celebration for ‘Liberation’ from all those states because there was no genocide that followed their integration.

In the case of Hyderabad, September 17 is celebrated each year as the “Liberation Day” of Hyderabad because this was the first genocide of Muslims committed in independent India.  That is why the Hindutva brigade wants to celebrate the occasion as a victory of Hindus over Muslims by camouflaging it with the word “Liberation Day.”

This is a very shameful act by the fascist forces in India. They want to make this a narrative of inhuman glory and celebrate the killing of fellow human beings and call it a “liberation day.”

The fact is those celebrating the genocide of the Muslims of Hyderabad are cannibals, who relish the day of killings as the liberation day.

None can deny the fact that the September 17 event was one of the worst episodes of Indian history. What happened during the course of the event was a despicable human tragedy. There should not be a fanfare for the integration of a princely state into the Indian union. If at all this day has to be remembered, it should be on a solemn note, remembering the dead and not a day of celebration for the human massacre and naming it a day of liberation.

This is simply humiliating to the current generation of Muslims living there. Such celebration in the name of liberation of Hyderabad unstitches the wounds of the first Muslim genocide in independent India. While such celebrations may give narcissist pleasure to some Indians, it really pains and angers many Muslims who are helplessly watching such an event.

So 17 September 1948 was the day of genocide where Muslims were mascaraed on a very large scale in Hyderabad. Such a celebration needs to be buried once and for all.

Trivia- Since September 17, 1948, the genocide of Muslims continues in bits and pieces. In the last 75 years, Muslims are habituated to dying in installments. Perhaps they did not pay their EMI of life insurance to the Hindutva elements. If we can count the number of Muslims killed by Hindutva forces in the communal riots or hate or religious violence the figures of last 75 years can not only shock the homo-sapiens, but it may turn the heads of the cannibals who may relish their feat.