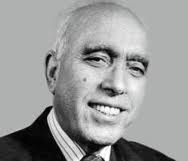 Sheikh Mohammad Abdullah’s release in January 1958, after an ignoble incarceration of four and a half years, was welcomed by the populace of Kashmir with an unbounded ebullience, which was marvelously delineated in the Time, January 20, 1958:

At week’s end Sheikh Abdullah, wearing a long black funeral-black achkan over loose white pajamas, held on to the windshield of his jeep and waved to crowds lining the road and jamming the towns along the way as he rode to the capital at the head of a 30-car caravan. Srinagar welcomed him with a frightening din. When the Sheikh appeared on the balcony of a Moslem shrine, people prostrated themselves in a heap below, crying vows that they would lay down their lives for him.

From across the city Premier Bakshi warned that Kashmir’s future was foreclosed, that his police would tolerate no challenge to law and order in “this border state of the Indian Union.”

On April 22, 1958, the Special Correspondent of The Times of London wrote:

. . ., one’s impression on returning to the valley of Kashmir for the first time since Sheikh Abdullah was released is that he is still a power to be reckoned with. Alone, his principal colleagues and supporters all in gaol [sic], his every movement under police observation, his very presence is enough to deprive the present Kashmir Government of all peace of mind. Yet one cannot imprison a man indefinitely because he is admired and loved; nor presumably maintain in office a Government if it is unable to make itself either.

Although Bakshi Ghulam Mohammad, the then Head of Government in Kashmir, claimed that the Government had sufficient evidence to indict the Sheikh, his wife, Akbar Jehan, and their trusted colleagues, the Government would not bring them to trial, as that, Bakshi Ghulam Mohammad cunningly claimed, would encourage the dissemination of “Pakistani propaganda” and “other anti-Indian forces,” which the more loyal than the king premier would not brook. He audaciously reiterated the uncorroborated charge that the Sheikh had been the recipient of funds from Pakistan to, allegedly, fund the upkeep of “private forces of volunteers.” Bakshi, outrageously, contradicted himself when he accused the Sheikh of inciting subversive acts to disrupt public order and right after asserted that, “the situation in Kashmir was absolutely normal and that there had been no demonstrations worth mentioning in protest against the rearrest” (The Times, May 6, 1958). The irony of Sheikh Mohammad Abdullah, an “Indian Muslim,” being put behind bars for voicing and advocating the right of self-determination “by the very Indians who won admiration and sympathy in the world in attaining their own” (Extracts from Commentary by Edward R. Murrow, 1 May 1958), wasn’t lost on the world community.

The rearrest of the Sheikh created a constituency for his and Akbar Jehan’s politics in those parts of the world that had lent moral support to India’s glorious struggle for freedom in 1947. An acclaimed American commentator profoundly noted, “It is ironic that the Lion of Kashmir who fought so long for freedom has been jailed again by a freedom-loving state. The Lion exemplifies the spirit of Thoreau, who said, ‘I was not born to be forced.’ And Norman Corwin once wrote, ‘Freedom isn’t something to be won and then forgotten. It must be renewed like soil after yielding good crops’” (Murrow, in broadcast over CBS Radio Network, May 1, 1958). Kashmir was, despite all claims to the contrary, Jawaharlal Nehru’s singular failure and cast serious doubt on the veracity of the Preamble to the Constitution of India. The Chicago Daily Tribune was just as unequivocal in its criticism of the Sheikh’s detention as other international commentators and political analysts.

His [Sheikh Mohammad Abdullah] arrest was under Nehru Government’s Preventive Detention Act, which permits Indian authorities to hold a suspect upto [sic] ten years without lodging formal charges. Abdullah has been making himself unpopular by demanding that the people of Kashmir be permitted to decide their own future by a plebiscite.

Abdullah’s record of arrests in the days of the British rule rivals that of Nehru himself. In a recent letter to Nehru, Abdullah remarked that the Prime Minister had turned the Vale of Kashmir into a political graveyard and was treating prisoners as if they were in a Nazi concentration camp. He may wonder whether there has been any significant advance toward freedom since Mr. Nehru dispossessed the British. All that has happened is that Abdullah has become a martyr in the cause of liberty under Britain’s heir. (May 5, 1958)

It did not take a skeptic to question India’s democratic credentials. Sheikh Mohammad Abdullah had been arrested for “his political leaning which runs counter to the Government of India in Kashmir. . . . Sheikh Abdullah was never known for resorting to or even calling for violence; all that he had called for was that the people of Kashmir should be given their just right and that they should not be oppressed” (Al-Zaman, May 7, 1958). Perhaps Nehru had forgotten his categorization of political arrests as criminal, which buttressed the conviction of those struggling for their political freedom.

Sheikh Mohammad Abdullah forcefully countered the allegation of breach of pledge leveled against him by the Government of India in 1953 and later in 1958:

With all the force at my command, I repudiate this allegation and submit that the responsibility for breach of pledges rests elsewhere. A pledge is not a one-sided affair. . . . When the charge of the breach of faith is, therefore, leveled against me, I have a right to pose the question as to where lies the responsibility for not implementing the promises and assurances given by the Government of India to the State of Jammu and Kashmir from the date of the tribal raid until my arrest in 1953. (Abdullah, “Breach of Pledge,” 31-32)

Despite the myriad attempts of their detractors to disparage and censure them, the Sheikh, Akbar Jehan, and their colleagues did not desist from trying to find a solution to the Kashmir conflict which would be in accordance with “the freedom struggle of Kashmir and the independence movement of the Indian people” (Abdullah, “The Kashmiri Viewpoint,” 41). They sought to find a practical solution to the deadlock that would enable preservation of peace in the Indian subcontinent, while maintaining the honor of everyone concerned. For the dreams that they nurtured, for the political idealism that they cherished, for the political and economic objectives that they sought to fulfill, for the communal amity that they worked hard to preserve, and for their unremitting love for Kashmir, they had to endure painful and difficult situations.