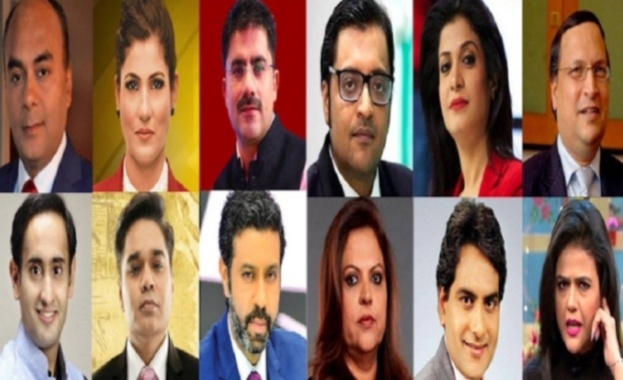 When media doesn’t have freedom in any state or country, it is an indication of this thing: ‘All is not well ‘ in that state or country. Censored media is indicative of country’s incommodious state of affairs. Whenever the countries in the world had witnessed dictatorship,Subsequent curbs were imposed on all forms of communication. Whoever have raised their voices against this outrage , either they had been killed or they had been incarcerated by these oppressive regimes. Nazi propaganda and censorship constitute the darkest chapter in the history of the world. History is testimony to the fact when Hitler came to power in Germany everything had been strictly banned by the Nazi govt in Germany, even ,freedom of press was not allowed to flourish. The whole litrature was changed in the entire country and the new litrature was based was lie and deception and it was far away from reality and the entire project was based to condone hate and devise schemes of othering.People,at that time in Germany were taught to follow the instructions of Adolf Hitler blindly and they were not allowed to ask questions regarding the illegitmate power of Hitler.

Same chapter was repeated in history of India ,when emergency was declared in India in 1975.Freedom of press was completely curbed to becloud the reality on the ground. Same tactics are being used by this govt ,Which the Nazi had done in Germany .This govt is trying to make situations day by day exacerbating and what is going on right now with journalism is totally opprobrium and baffling everyone.Govt is using its coercive measures to supress of voice of sincere journalists.Freedom of speech is day by day dwindling in India and there is no place for dissent in democracy. The fourth pillar of democracy is not only rattling but it’s independence has been undermined and suffocated by this govt.Those journalists who are lambasting govt policies either are been tagged as anti national or they are consider as “Pakistani sympathizers”. There is no place for sincere and impartial journalism in India. Majority portion of Indian media is biased and corrupted,Who are acting only as a mouth piece of govt.Anyone who will speak a single word against govt on these ‘govt sponsored news channel is being scathed very badly or heckled by these ” fanatic newsanchor of govt”.

Instead of highlighting grievances of public by media ,Media is disseminating a particular ideology that is condoning hate politics and bias regarding minorities and targeting minorities unabashedly has been routine of this media. They are highlighting those issue that are totally ridiculous for public, such as ; Excessive focus is given on Mandir and Masjid issue,hate politics, to force minorities especially Muslims to chant slogan of ‘Jai Sri Ram ‘ and the preposterousness is this,those who don’t chant slogan of ‘Jai Sri Ram ‘is not considered as antinational only ,but also anti religion. Religion is used to condone hate and to create barrier between. Hindu and Muslims and to engage them in fighting with each other over quibbling issues. Media in India is hardly bothered about the fundamental issues of public,Such as; Unemployment crisis Is skyrocketing in India ,Stagnated and plummetered economy , Failed policy of Modi govt ,Excessive corruption and nepotism ,crimes against journalism , moblynching of Muslims,unabated killing of innocent civilians in Kashmir, violence against students in recent protests in different university,Supporting brutalities of police and mob violence is being justified and extolled by Media etc.These all things justifies that media is not “public centric ” it is “govt centric” and is busy to deepen fabricated narrative of govt to fullfill their “Unquenchable thirst for money “.Media is highlighting that part of govt policies which is feasible to their masters.

Media is completely following inhumane and fanatic approach.Media is hardly concerned about those ,who are marginalised, expoliated and ‘victim of majority tyranny’in India. Media is one of the main culprits in India that play an role of ‘sheer anchor ‘ in deepening the binaries with the help of govt.Media is at forefront to dissedisseminate propaganda ,hate politics and villify those who don’t support Hindutva ideology in India. These all things are doing by Media to prevaricate people from fundamental issues ,so that they can spent time over those issue that are totally ineffacious, Such as :Masjid and Mandir Issue ,To meddle in the religious matters of others, to condone hate politics against others in the name of religion. Due to which they can forget their basic issue such as :Good Governance , Employment to youth ,good health care for citizens,removal of poverty. These tactics are used by Media to dissemble truth about the govt,that is how govt has failed to fullfill it’s promises with people very badly on ground level such as :Promising of 2 crore jobs every year but it has generated only 18 lakh jobs in India,one more popular slogan was , ‘ Bahut hui mehangai ki maar /Ab ki bar Modi sarkaar’.The pm grandiloquently pledged to bring the nation’s ‘black money ‘stashed aboard and put 15 lakh into every Indian’s bank account; neither has happened. It is because of these problems,promise of acche din by Modi govt in 2014 and 2019 looks to be only chimera and mirage at the ground level. Slogan of ‘Acche din ‘ have been used by BJP supporters extensively during the time of election, for the sake of vote bank politics,so that they can fullfill unquenchable thirst of power again.

This media is too much biased whenever ‘issue of Kashmir is being d- iscussed over these news channels that are pro-govt.News anchor over these channels are justifying state violence over innocent masses of Kashmir. They are jingoistic and blind to that extent they are never trying to know the root cause of a problem and are directly jumping on the fabricated conclusion which have no base at all.Instead of highlighting the pathetic and miserable condition of Kashmiri people they are describing them them as a terrorist and any one who will demonstrate over the brutal oppression is being imprisoned in the jail. Madness of this media is to that extent they are justifying “Language of violence over Kashmiri masses and are extolling illegitmate force of Indian Military and are extracting lot of money from it and also getting a patriotic fame in the eye of govt.

Whenever they invite any pro -Kashmiri on these channels for debate,instead of listening to him/her they are shouting at them recklessly without maintaining decorum of debate.This media justify illegal acts that are being slapped by govt of India over innocent masses of Kashmir and even this media is using pakistan as pretext to defame indigenous movement of Kashmiri people. All these things delineate that media have no sympathy for human Value and give perference to money oriented things.This further depict how media in trying to hoodwink people to dissemble truth about the kashmir that is totally disgraceful and disdainful act of media in India.Instead of following pacifist approach over Kashmir issue they are supporting belligerent and pugnacious approach instigated by Modi govt. Since this govt came into power in India they have used media for negative sense and they have conflated media slyly with ‘govt discourse ‘.

Media have been also used by govt to condone hate against Pakistan. Madness of this media is this they are discussing mostly about the problem in Pakistan instead of focusing on their own problems. Media is using full vigour and courage to spread venom against Pakistan and is lefting no unturned stone to slander pakistan not only at global level but also local level.If any untoward incident happen in India, they are entirely blaming Pakistan for it ,without having ample of evidences.Interesting facts that we need to acknowledge about this is :These tactics are being used to legimitize hate against Muslims in India too and want to deepen their political power and wanted carve out a new image of fanatism among public so that they can blindly support them.From these foolish tactics it is ostensible that they don’t want to resolve their issue with Pakistan peaceful and want to follow hawkish and overweening stance against them ,to make relationship more aggravated and strained. Blindness of media is to that extent they can take any step for the sake of hyper nationalism that will sabotage Indian nation in second and now Bollywood celebrities are being actively entangled in this lunatic nationalist phobia by Media .Those Bollywood celebrity who are being entangled in this lunatic discourse ,they hardly know anything about ground realities.

Journalism is not a crime ,it is one of the noble and cherishing profession for those who are working with it.It act as a interlace between govt and people. It highlights both positive as well negative aspect of the govt policies along with the grievance of the people .Modi govt must given appropriate space for journalists,who can speak with full impunity without having any kind of paranoid from govt or other institutions of govt.Govt must impose limited restrictions on freedom of press ,so that ,restrictions can’t become hurdle in the working of press.Govt also must admit constructive and positive criticism from all sections of society,so that they can rectify the flaws in their policies. They must be accomdative and listen to those very carefully and sensitively who are oppressed and marginalised in society ,instead of following overweening and hawkish stance it.In India,need of hour is to have independent media- that will not be judgemental and biased towards any community and they need to follow a balanced approach between govt and people. We need those people in media , who are technically and professionally sound in it ,who are driven by ‘reason ‘ not by ’emotions ‘.Media need to speak ‘Language of public’ instead of ‘Language of their political masters ‘. Media must not be money centric .Once it become a money centric it lost its essence and become a ‘commodity.From all these things we come to conclusions that media in trying to fullfill it’s over rapacious interest to Sunder the people of different section of society over quibbling issues and are discussing everything in a dishevelled and shabby way.In India need of hour is to make reforms in media and to disentangle it from govt influence,so that media can be liberated from corrupted practice. Otherwise this kind of media in India will sabotage it from every angle and will foment further deep ruptures in Indian society.

***
The author  can be mailed atarifrashid636@gmail.com