Muslim Mirror
Home India The Jewar-Airport Made in China! BJP is ‘failing and falling’ on...
Facebook
Twitter
WhatsApp
Email
Telegram 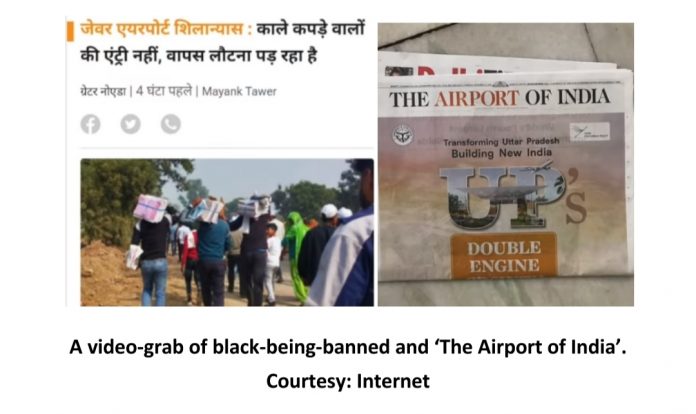 Ever since the three-black-anti-farmer laws were forced to be withdrawn, by BJP PM Narendra Modi, there is a sense of euphoria amongst the farmers and everyone who opposed the anti-people and pro-capitalists policies of the BJP government. The protests have been into the frame since September 2020 and over the time became more aggressive due to the arrogance of BJP government in UP too, where in Lakhimpur, a Union State Home Minister Ajay Mishra’s son Ashish Mishra allegedly over-ran his cavalcade of SUVs killing four-farmers on the spot on October 3. This has found farmers showing black flags to Defense Minister Rajnath Singh, Home Minister Amit Shah and to BJP MLA’s all across the country, and the latest to beat the hasty retreat has been Pankaj Singh, son of Defence Minister Rajnath Singh, MLA from NOIDA, Gautam Budh Nagar, UP, who was given a hot chase, and had to run by climbing the divider as voices of ‘Jai Jawan Jai Kisan’ thronged the air, forcing Pankaj Singh to flee the scene on November 24, the mainstream media did not find it even worth mentioning!

Closely on the heels came the extravaganza by Narendra Modi on his visit to inaugurate Jewar Airport at NOIDA, Gautam Budh Nagar, UP on November 25, and farmers took to streets to protest the visit of Modi. It may be mentioned here that more than a 100 farmers were already under house arrest for ten days as government apprehended protests, but that did not deter the farmers, who have been campaigning against their land acquisition, since long, as their men and women took to streets below the flyover leading to Jewar Airport. The land has been acquired by force for the urban development policy, which has rendered many to lead their lives ‘without a roof on head’. The protestors, particularly from Gujjar Samaj have been on the forefront, hence, Ram Veer Gujjar, their leader’s house was surrounded by police and he was put under house arrest. UP BJP CM Ajay Singh Bisht was also present.

The sponsored crowd, had to be bludgeoned, through state machinery as UP is now into its last phase to go to polls, hence, there is an inauguration spree, which is solely to remain on the cards, as UP Ex. CM Akhilesh Yadav has termed it as an effort to firstly make the airport and later to sell it off to Corporate! As had been reported earlier, the same happened, as anyone with black clothes, black mask or a black cap was turned-out, and BJP government deployed 5000 policemen to guard any protest to happen. 56 IPS officers were put to duty. It did not come at all as a surprise that media, which is the sole machinery on which Modi runs his government, became so gaga yet again, that Bennett and Coleman run The Times of India changed its name to The Airport of India (sic). Sections have media have by any standards become the proverbial lap-dog of the government. 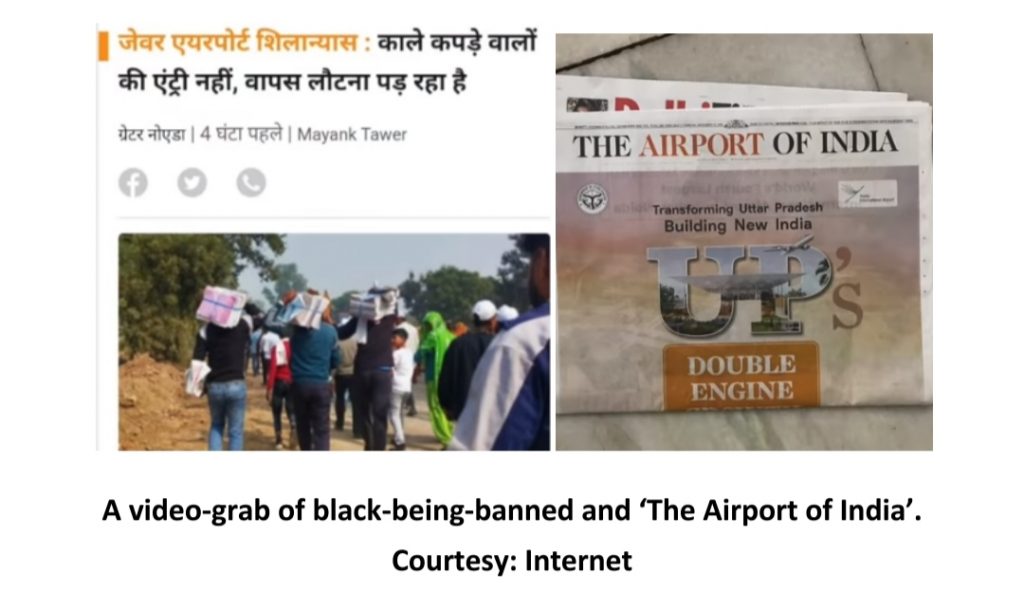 But, come what may, yet there were protests which despite the brute force could not be suppressed as lawyers in their black robes took Modi by the horns, and all this happened while Modi’s speech was going-on. PM was stunned as lawyers with banners, which were snatched by BJP workers, were putting on their long-pending demand of establishing an Agra Bench of the Allahabad High Court for Western UP. Lawyers, who were shunted-out from the venue, sat on the streets, and had from much earlier announced their protest which could not be thwarted, despite the whole state-apparatus put-into-force. Ironically, AS Bisht had promised for Agra Bench long back.

BJP is adamant to befool people for ‘all-times’ as it is bent upon to dish falsehood and fake posters for its own accolades, as if it wasn’t enough for the shameful way it co-opted a West Bengal Flyover and later a Telangana Dam as Bundelkhand Dam, as its own, that the same happened over Jewar Airport too. As a new advertisement with a grandiose Jewar Airport, suffixed with Yogi-Modi pictures is donning the BJP circles, while the truth is that the airport shown in from China! 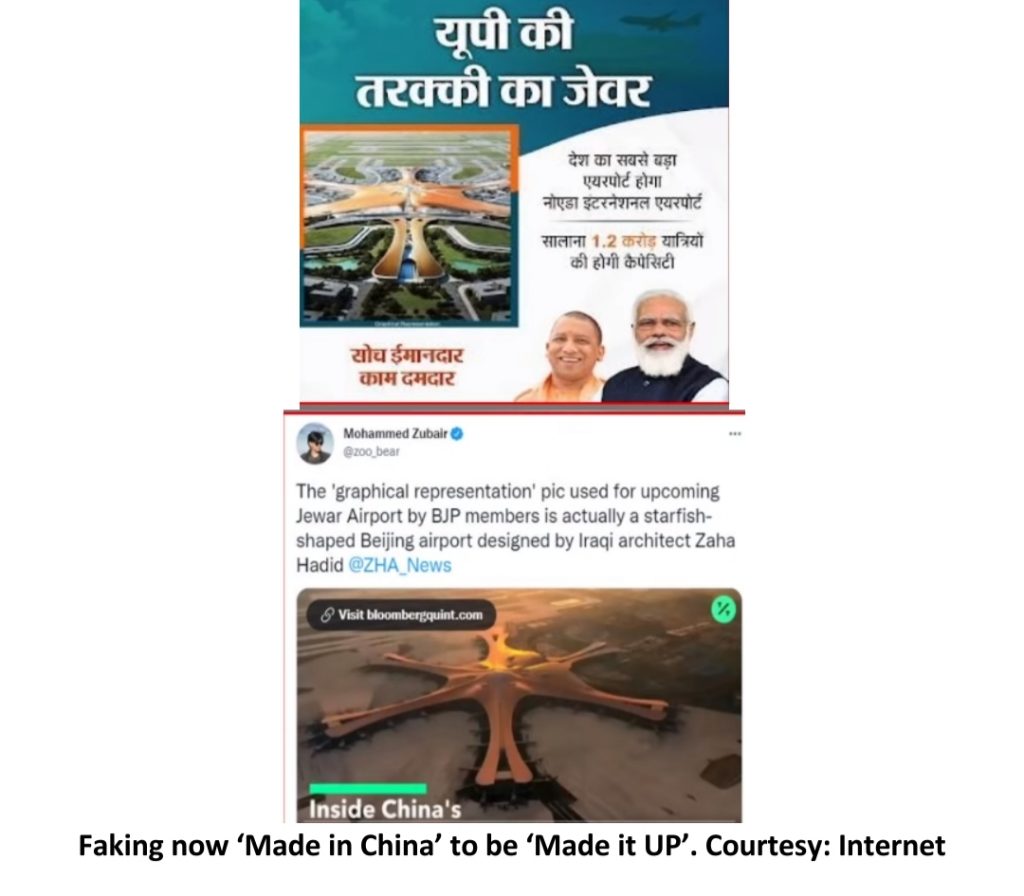 It is also learnt that two Central Ministers, visited Gorakhpur, including Arjun Ram Meghwal, on November 25, to address and only 200 seats were made available, according to Prabhat Khabar! Gorakhpur is where AS Bisht comes from.

BJP whose central idea is to change the Constitution of India, to carry it unto Manusmriti (the ancient law of India) where the majority was considered as untouchable, was forced to celebrate November 26, as Constitution Day, owing to the mammoth sentiment of people all across India to organize this day as a day for equality and democracy. The entire Opposition boycotted the new-found-love of BJP for Constitution, where Modi addressed in Central Hall of Parliament, targeting Congress for being a ‘Parivadi’ (family-centric) Party, whereas the fact is that there are thousands of fascists foot soldiers of RSS Parivar i.e. Bajrang Dal, Vishwa Hindu Parishad etc who trample Consultation under their feet every day! Modi never cares for it. On the contrary, BJP Defense Minister Rajnath Singh son Pankaj Singh enjoys the best VVIP treatment, BJP Home Minister Amit Shah son Jai Shah runs BCCI, its Ex Governor Kalyan Singh (now deceased) son Rajvir Singh is MP and his grandson Sandeep Singh is a Minister in UP, BJP Minister Swami Prasad Maurya daughter Sanghmitra Maurya is MP, Himanchal Pradesh BJP Ex. CM Prem Kumar Dhumal son Anurag Thakur is a Minister at Center, BJP Ex. Central Minister Pramod Mahajan( now deceased) daughter Poonam Mahajan in MP, BJP Ex. Central Minister Gopinath Munde

( now deceased) daughter Pankaja Munder has been a Minister, BJP Ex. Rajasthan CM Vasundra Raje son Dushyant Singh in MP! The touted logic given by Modi in his speech that people should be elected on their ‘qualifications’ , is yet again a tight-slap on our democracy, and hypocrisy in totality, as how come this army of bigwigs got elected if not perpetuated by BJP!

It is now time for people of India to shut doors to such hypocrisy and see an end to BJP from UP in 2022 and later at the Center in 2024. UP is just waiting for the moral code of conduct to be in place.

Should Jewar International Airport be named after Gandhi?