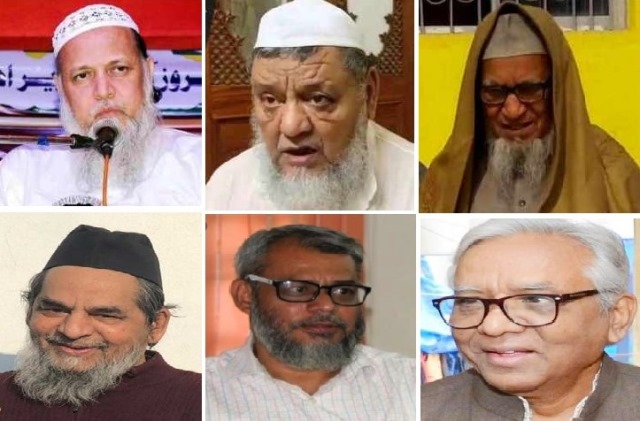 News of passing away of Maulana Matinul Haque Usama Qasmi and Maulana Syed Muhammad Salman Mazahiri in quick succession spread a pall of gloom over an existing depressing situation shadowed by the murky coronavirus. One day last week when I checked my Facebook account the first three news pieces that un-greeted my eyes were related to death. In order to avoid a negative feeling to overpower my senses I signed off immediately. However, as is the case with most of us nowadays, we hardly live without social media. And whatever we see there has an impact on our overall thinking, action and emotional health.

The news of Maulana Usama Qasmi on 19 July came as a shock not because death is defeatable but because we are already in the grip of sadness, shock and stress. He was in his fifties and had graduated from Darul Uloom Deoband in 1989. Being president of the Uttar Pradesh chapter of Jamiat Ulama-i-Hind, Maulana Usama played a proactive role in a number of social activities. He was also city Qazi of Kanpur. He also worked to enhance the educational profile of new madrasa graduates by establishing Haque Education and Research Foundation on the line of Markazul Ma’arif Education and Research Centre. He was a known public orator who raised the voice of the deprived and downtrodden sections of society. Mere presence of such persons gives courage to many and when they pass away, their absence is heavily felt.

On 20 July, just two days after Maulana Usama’s demise, came another shocking news of passing away of Maulana Syed Muhammad Salman Mazahiri. In few social media groups some people even refused to believe it taking it as a rumour. However, the inboxes, chat boxes and WhatsApp groups were soon flooded with the news of Maulana Salman’s death and the sad reactions and condolence messages of ‘ulama, intellectuals and other persons.

Maulana Salman Mazahiri was the principle administrator of the famous religious madrasa Mazahir Uloom in Saharanpur. The news of his death shocked also because only three years ago, in the same month of July, one of Mazahir Uloom’s eminent scholars Shaikhul Hadith Maulana Muhammad Yunus had passed away and people were still mourning his death. Besides looking after administrative responsibilities, Maulana Salman also taught Hadith and other subjects. His Dars-e-Mishkat was very famous.

It was and maybe it is widely believed among the students of Mazahir Uloom that the renowned Shaikhul Hadith Maulana Muhammad Zakariyya Kandhalwi had two treasures to offer to two of his disciples. One was his scholarship and the other was his beloved daughter. Shaikh Yunus was quick to be his heir in Hadith and thus he offered his daughter in marriage to Maulana Salman. Whatever the truth of this commonly circulated story, with demise of Maulana Salman the two scions of Shaikh Zakariyya and the prominent scholars of Mazahir Uloom are gone forever.

While writing this I received another sad news of passing away of Maulana Abdur Rashid Qasmi, imam and khatib of Masjid Huda, Sindhanur. He is said to be the last surviving student of ‘Allama Ibrahim Balyawi and Mualana Fakhruddin Ahmad Moradabadi. He was also the first ‘aalim in his region who graduated from Darul Uloom Deoband. As if it was not enough, the news came of demise of Maulana Wasi Ahmad Siddiqui, a senior ‘aalim (scholar) of Bihar, the founder-rector of Madrasa Chashma-e-Faiz, Malmal. Born in 1945, he had studied at Darul Uloom Deoband. In 1992 he established Jamia Fatimatuz Zuhra, Madhubani, considered the first madrasa for girls in Northern Bihar.

The morning of 22 July brought me even a more shocking news. Prof Faizanullah Farooqi, retired Professor, former Chairperson, Centre of Arabic and African Studies, Jawaharlal Nehru University was no more. Farooqi Sahab had graduated from Darul Uloom Deoband before embarking on a successful journey to higher contemporary education. A renowned Professor of Arabic he was, his knowledge of Persian, poetry and Mughal history was profound and amazing. His demise comes as a big loss to Arabic scholarship in India following the death of another prominent Arabic scholar, Dr Wali Akhtar Nadwi who breathed his last on 9 June. Both Professor Faizanullah Farooqi and Dr Wali Akhtar Nadwi were Presidential award winners for their valuable services to Arabic. Both were reported to be Covid-19 patients.

Renowned Urdu writer and satirist  Nusrat Zaheer  also  left for heavenly abode in Saharanpur in Uttar Pradesh on Wednesday evening at the age of 69.

Zaheer is known for his satirical writings, he worked as  a journalist,  with Qaumi Awaz, Sahara Urdu, Doordarshan and All India Radio in different capacities. Some of his books include Tehtul Lafz, Ba-Qalam-e Khud and Kharraton Ka Mushaira.

Zaheer had been ill for the last few months. He is survived by his wife and four daughters.

Widespread death in general and death of ‘ulama, one after the other in quick succession, in particular, is not a good sign. It reminds us about a Hadith that says ‘ilm i.e. knowledge would be taken away before there is a great destruction. And death of ‘ulama, who are carriers of the knowledge of Qur’an and Hadith and members of knowledge community, amounts to knowledge and noble people being taken away. ‘Abdullah Ibn ‘Amr reported the Prophet saying, “God does not take away knowledge by removing it from men, but takes it away by taking away the learned, so that when He leaves no learned man, men will take ignorant men as leaders. Causes will be presented to them and they will pass judgement without knowledge, erring and leading others into error.” Mishkat al-Masabih 206, Book 2, Hadith 9. The Hadith also appears in Bukhari and Muslim.

With mystery still surrounding the novel virus, it is not out of place to imagine that the Creator God has been sending warnings to all mankind to be careful with issues of injustice and dealings with human relations. It is therefore time to pray, use maximum precautions and specially, shun injustice and evil practices, implement justice and avoid corrupting the society and violating the forces of nature which provides so much without any cost whereas we humans put a price on even what is given free by the nature.