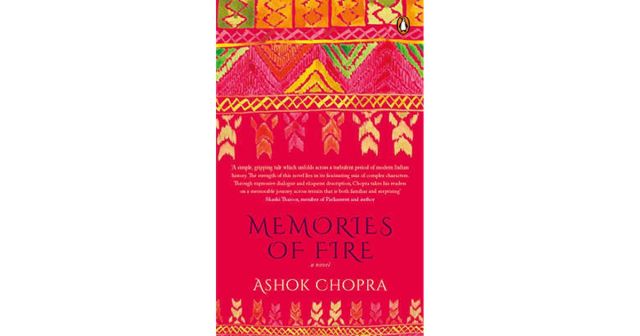 New Delhi : When Ashok Chopra set off on a career in publishing, it was a totally different world — but along the way, as he was climbing up the ladder and making a mark in the publishing space, the industry itself was undergoing massive transformation. More than four decades later, he is a publisher-par-excellence, revered and held in high esteem, but how does such a publisher fit into the shoes of a novelist?

And it is at this stage that he has published “Memories of Fire” (Penguin/Rs 599/440 pages). The novel is billed as a “compelling story of five childhood friends meeting after a gap of 54 years”, who “embark on a journey into the past, laden with nostalgia and humour, and encompassing all the ugly and wonderful things life has to offer”.

Speaking to IANS at his office in Vasant Kunj here, Chopra points out that “everything (in publishing) has become very commercial and fast-moving”. He also recognises the fact that “there’s not much scope to experiment today” because publishing houses are always looking at “the bottom line”.

“Marketing has taken over; today, publishing houses are controlled by accountants and not editors. There is no such thing as bad, everything is good. It is just that when I joined publishing, it was not like this. Things have changed — everything has now become market-oriented. And why not? It has led to a lot of new writers coming in. They have done a great job,” he says.

But if that is the case, what propelled Chopra to come out with a 440-page novel, written in a style that does not appear to match with the interests of “the bottom line”?

Well, there is a reason.

“I cannot write to the diktats of the market. I have written this book for myself; I never had the readers in mind, I didn’t even know that it would be published. In fact, I don’t think I started this novel with the intention of publishing it. I worked on it for three years. When I started writing this book, it was not with an audience in mind, because that would defeat the purpose. I wrote the book only for myself,” says Chopra.

Chopra’s response is a timely eye-opener for many in the current publishing scene — and maybe for himself too.

The point is that not all writers are as fortunate as the man who “has occupied some of the hottest seats in Indian book trade” and therefore the different approaches that Chopra applies for writing and for publishing tell a sordid story. Market pressures and bottom lines decide the books that go into print and a writer perhaps cannot afford to ignore the readership, unless he is one in a similar league as Chopra.

Nonetheless, Chopra also elaborates on the role of editors in publishing a book. His personal experience was helpful too.

“It does come handy at times. You are writing with a certain feel and it automatically so happens that you are also kind of editing as you are writing. It becomes a natural process. But I also depend heavily on my editors.

“The editors just mould it. I give my editors a free hand and I tell them: ‘I have done my job now you go through it and you have got a free hand to alter, delete and change anything that you want to.’ I was asked by my editor at some point, this is not reading well, can you add something to it? And I was following it quite strictly.

“Despite being an editor and publisher, the best of writers do need editors. A halwai never eats his own mithai and knows its taste; it is similar with a writer. I depend on the editor just as a writer depends on me while I am editing his book,” he says.