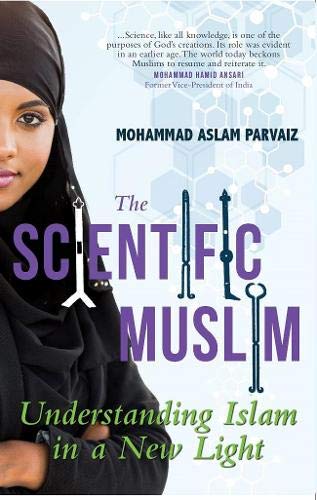 There are some books that refocus your life and immediacy of concerns in a way that is deeply profound. Mohammad Aslam Parvaiz’s ‘The scientific Muslim’ does that again and again. Because of the title I had assumed it was going to be a heavy academic read,but nothing could be further from the truth.

Ever since the dawn of human life on Earth man has always sought to understand nature and been in the quest to find his own place in the scheme of creation and the purpose of life itself.The first verse that descended on the Prophet Muhammad (Pbuh) was ‘Iqra’ meaning “read”,opening the door to read,write and ponder but unfortunately Muslims took that command at it’s face value and they treat the Quran as a book of mere ‘reading’ it from cover to cover without making any efforts to understand it.

In this book the author has reiterated the importance of acquiring knowledge through pondering on Quran and reflecting on the universe, that would bring them closer to God and His creations.He argues that the sources of gaining knowledge are two fold; the revelation and the universe. A Muslim can never reach the zenith of certainity and conviction until he takes from both sources and scrutinizes them. Both sources come from Allah and address the human mind and senses.The author has also dealt with the troubling question that the history raises : What caused the decline of science in the Muslim world?

He explains, that it was because the knowledge base of Muslims has shrunk and they have become conformist. They are comfortable in others making discoveries for them, while they slay on their couches.They are happy in whatever crumbs are being thrown at them as long as it doesn’t demand any muscular and intellectual efforts from them. “We are not in a situation to do anything” has become the most popular catch – cry of muslim ummah.They have abandoned Quran or turned it into a book of past and a blessing for parties, as result they lost their privileged position.

He further says, that whatever momentary value prayer may have in the life of a believer, it’s real efficacy is judged by the impact it has on our daily lives. What about those among us who do actually pray five times a day but never get filled up and the next prayer time finds us exactly where the last prayer left us? What about we who have being queuing up for petrol for decades and our tanks are still empty? There is no reason to suppose that our intellectual sustenance requires any less effort and energy than our material sustenance.

The Scientific Muslim” is suppose to be a handbook for a vanguard of Muslims who really want to prosper in both the worlds. He stresses on the fact that the Islamic acts of worship hinge on pondering, contemplating and revering the creativity which is encased in the universe. He argues that the only way to rise above our humiliation is by giving Quran it’s due rights i.e reading, reflecting and acting on it. Towards the end of the book the author has shared some lessons from the Book of the Universe, personally I found them quite refreshing because they implore the reader to draw their own reflections from their surroundings.

The writing style is accessible and engaging. It was an easy read in terms of how he wrote it but really heavy and insightful in his meaning and reflection.