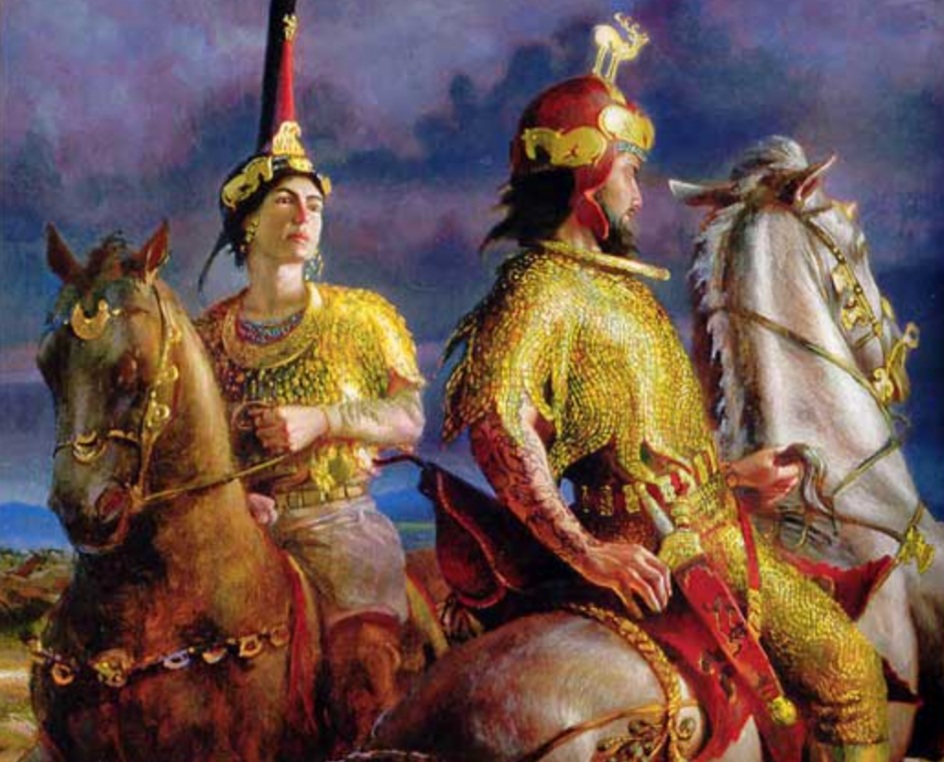 The Shakas or Scythians have been a big name in history.  They dominated Central Asia, Iran, Afghanistan, Kashmir, Punjab, North India, Sindh, Saurashtra and Malwa during different times of history.  But gradually their history became blurred and they got mixed up with the local populations in such a way that now it is difficult to identify them as a separate entity.  Many historians associate the Kurds of Turkey, several tribes of Afghanistan and the Jats of India with the Shaka race.  Their greatest contribution to the world is the military use of horses and chariots.

After leaving Central Asia due to Parthian attacks, the Shakas established their power on this side of the Indus river several times and gave a lot to India.

The importance of the Shaka rulers in India can be understood from the fact that they gave the country its officially approved ‘Saka’ calendar.  After independence, its status has become legal from 22 March 1957, i.e. Chaitra 1, 1879 Saka Samvat.  This calendar was commenced to commemorate the victory of the Shaka king Nahapanah or Sistan over the king of Ujjain in 78 AD.  After this victory, the Shaka kings ruled a large area from Sindh to Ujjain for about two hundred years.  Sistan’s son Jayadaman and grandson Rudradaman were also famous satrap rulers of Ujjain.  After being defeated by the Satavahana kings or Emperor Chandragupta, their power in India faded for a few centuries. Then, their new era began from the eleventh century onwards.

Even in the fifth century BCE, the Shakas established their kingdoms in northern India.  Siddhartha Gautama Buddha, popularly known as “Shakya Muni” and the founder of Buddhism, was also related to the Shakas.

The Shaka armies attacked the Indian subcontinent several times, sometimes also created Shakistan across the Indus river and established their rule over a large area on this side of the Indus river and most of them settled here.  The historical Shakistan also included a part of Gujarat, Rajasthan and Punjab.  The Shaka people are generally considered to be Iranian, but today it is difficult to distinguish their races.  However, in history, they started the skill of grooming horses and using them in war attacks, about four thousand years ago.  By the way, Moga of the 1st century BC, is considered to be the first Shaka king of India who made Gandhara his capital and ruled up to Mathura.

Later, the Shaka tribes converted to Islam and re-established their rule on both sides of the Indus river in the form of Mahmud Ghaznavi, Mohammad Ghori and Delhi Sultans.  All of them were called Truska (Turkey), Tajikesha (Tajik king) Shakendra and Shakadhiraja (Saka king) or Suratan (Sultan) in the Sanskrit literature of that period.  For example, in the Palam Baoli Inscription of 1276, the sultans of Delhi have been described as “Shakendra”, meaning Shaka kings.

The Shakas adopted different religions at different times.  Sometimes they were fire-worshippers, then they become Buddhists, some of them also became Puranics and many embraced Islam.  Presently, most of the ‘Hindu’ Jats are Aryasamaji.

If the opinion of some thinkers is accepted, then the prophet Zul-Kifl mentioned in the Qur’an could be the prince Gautam Buddha.  They believe that the Zul-Kifl (of Kipl) is not a name but a sign denoting the personality related to the city known as Kapilvastu, which Buddha was.  If this is true, then the relation of the Shakas to the Islamic tradition seems very old.

The Jat castes in India are considered to be either Aryans or Shaka-Scythians.  The words ‘Jat’ and ‘Jati’ themselves have come from the Shaka language.  More recently, in a genetic research of 302 Y chromosome haplogroup of Jats, it has been told that the DNA of Jat castes is related to many different areas of the world.  According to the 1931 census, 47% of the Jat castes were considered Hindu, 33% Muslim and 20% Sikh.  Muslim Jats in Haryana are called “Mulla Jats”.

When Sanatan Islam was being reintroduced in a new form in Mecca in the seventh century, at that time many Jats settled in Arabia had accepted Islam.  Jat is called “Zut” in Arabic and is mentioned in many Hadiths.  For example, in Bukhari’s Hadith (3438), Prophet Muhammad describes Hazrat Musa as having a copper complexion, straight hair, and a tall stature “as if he were from Az-Zut”.

From this glimpse of the history of the Shakas, one thing becomes absolutely clear that there is no direct relation between the faith of the people and their race.  The boundaries of countries keep on changing and so do the beliefs of the people.  Therefore, history does not give any credence to the idea of ​​’cultural nationalism’.