As USA is now on to its final withdrawal, after waging a war against Afghan Taliban (AT) for 20 years, the world has been perplexed as to why would a super-power US has been forced to flee from Afghanistan, and that too, after negotiating a dialogue with the same people against whom it had waged a war. It is now almost an year when I wrote an article in CounterCurrents on July 22, 2020 1 in which I had elaborated the waning of power of US. In the same piece I had cited a report, published by US National Center for

BioTechnology Information, which had given the most crucial data, to have forced the then US President Donald Trump enter into the 14-months gradual withdrawal which is to end on September 11, 2021. The report had informed Post Traumatic Stress Syndrome (PTSD) to have devastated US army to no end! To quote from it again, ‘Estimates of PTSD prevalence rates among returning service members vary widely across wars and eras. In one major study of 60,000 Iraq and Afghanistan veterans, 13.5% of deployed and non-deployed veterans screened positive for PTSD, while other studies show the rate to be as high as 20% to 30%. As many as 500,000 U.S. troops who served in these wars over the past 13 years have been diagnosed with PTSD’. This is what forced US to cool its heels. 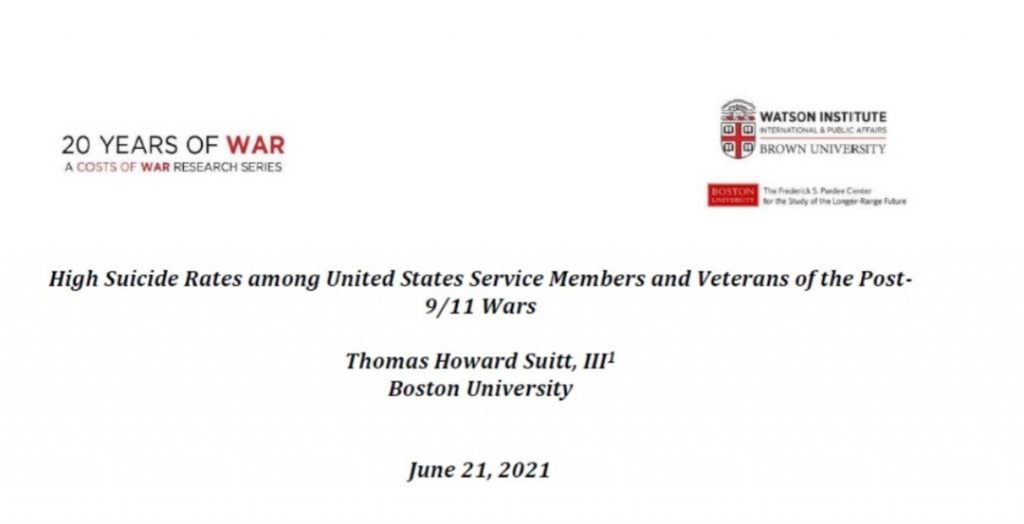 Now yet another damning report has arrived which proves an answer, to the most vexed question, as to why was US made to retreat and vacate Afghanistan, after bludgeoning the best imaginable weaponry, trillions of dollars, supported by NATO and against what was called the ragtag army of AT! This is the secret which US and its entire state apparatus tried to hush for 20 years and now all the beans have been split and skeletons tumbled out of cupboard. A 35-pages report from Watson Institute at Brown University, US, released on June 21, has disclosed that the main reason why US could not fathom to stay-more in Afghanistan , due to a stupendous rise in suicides! The report said, ‘ Suicide rates among the US public have been increasing for the past twenty years, but among active military personnel and veterans of the post-9/11 wars, the suicide rate is even higher, outpacing average Americans. The “post-9/11 wars” refers to ongoing U.S.-led military operations around the world that grew out of President George W. Bush’s “Global War on Terror” and the U.S. invasion of Afghanistan in 2001. This paper estimates 30,177 active duty personnel and veterans of the post 9/11 wars have died by suicide, significantly more than the 7,057 service members killed in post-9/11 war operations’.

The world is now to analyze through this devastating report that it is the rate of suicides which forced the US to not to further blow its army men into the furnace and eventually come back home. If this figure of 30,177 US army men committing suicide is not fudged, which surely it would be as US will never bring out the real figures, but even if this figure is contextualized, it is a clear indication that US has never lost its army men in as many big numbers. Perhaps, this is the worst ever war which US has ever fought, in all over the centuries of wars, it has waged around the world. Whereas, on the contrary there is a probable zero percentage of suicides amongst AT. The researchers of tomorrow would reveal as to what made AT stand to their nerves, and that too, against the mightiest of armies in the entire history of mankind, if not for their motivation and perseverance! And, also in its stride keeping conformity with the old dictum that Afghanistan has always been the graveyard of empires. Be that the once British Empire, or the super-power Soviet Union or now the US.

It is a larger known fact of US life, as to how much US invests in its health-industry, and more particularly, into its stress-management. Imagine if US was not to invest so high in stress-management, this figure would have to have had gone quadrupled. Interestingly, this figure of 30,177 deaths does not include those US army men who died in combats or even of those private militias, owned by the likes of Erik Prince, who run Blackwaters etc. Why would US army men lay down their lives on their own? Perhaps, due to the fact that they may have found the war as useless and goalless, or else there is no point of comparison between a US soldier, saddled with the most imaginable expensive gadgets and ammunition, in combat with AT in not even proper shoes.

China by hosting to the most powerful AT delegation has given a signal to accept AT government. Now, Russia is planning to come forward with the same. An article in Financial Times on July 27 2 suggests, ‘Russia seeks to forge ties with Taliban as US troops leave Afghanistan’. Zamir Kabulov, the Special Representative of Russian President Vladimir Putin ‘described the Taliban’s advance as a security boost for Russia’. He also announced that China, Russia, Pakistan and US are to meet on August 11 as an ‘extended troika’ to discuss the Afghan situation but China may also be putting to US, the issue of the latest blast of Dasu Dam (KPK in Pakistan) in which 9 of its engineers were killed. China had conducted a joint-investigation with Pakistan and the report has been handed to Washington. China is said to have been extremely angry over the killing of its engineers. Unfortunately, India is no where around this formula of ‘extended troika’ as Zamir Kabulov had lately said that India does not have any influence with AT, reported TOI on July 22 3.

Meanwhile, as fighting between Ghani forces and AT escalates , it is reported that on July 31, Ghani forces have attacked Ariana Afghan Specialty Hospital in Helmand where AT were getting their fighters treated. The worst part is that Ghani forces attacked it using the helicopters provided by India. ‘An aircraft provided by India to the Afghan National Security and Defence Force (ANSDF) has been used to bomb a hospital in Helmand province of Afghanistan, the Taliban alleged on Saturday, calling the attack a ‘war crime’, informed Deccan Herald on July 31.

The Ariana Hospital bombing seems to have disadvantaged India more, which has already vacated its Kandahar, Herat and Jalalabad consulates. India’s growing worry is that a pro-China and a pro-Pakistan government, supported by Russia, is in the making in Afghanistan, and it is here where India needs to streamline its polity, particularly more so, regarding China which has been constant lately, in interfering inside Indian states bordering it.

One thought on “The suicide of 30,177 US soldiers forced US to ‘retreat’ from Afghanistan”