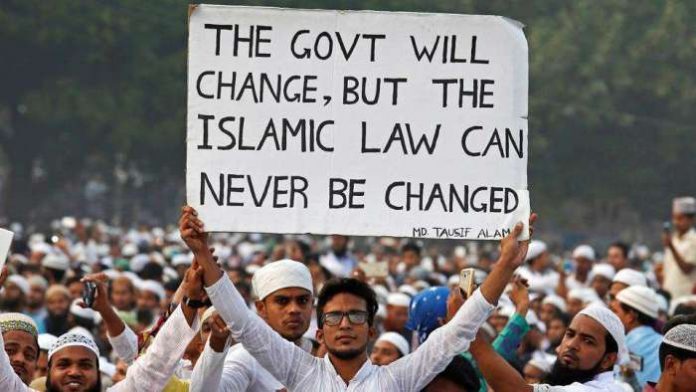 Every punishment which does not arise from absolute necessity, says Montesquieu, is tyrannical. In fact, criminal law should be used only as a “last resort” (ultima ratio) and only for the “most reprehensible wrongs”. Excessive use of criminal law for purposes it is ill-suited to tackle is the harsh reality of modern state. Since 1977, 3,000 new offences have been created in England and in the US we have approximately 3,00,000 federal crimes today.

No figures are available about India, but every year we are enacting new criminal statutes both at the Centre as well as in the states. The triple divorce bill is yet another instance of overcriminalisation. Even the Supreme Court had noted that incidence of triple divorce is insignificant. Just like 2G scam, the media has played it out of proportion. The real problem of Muslim women is education and employment.

Consider the two current debates about matrimonial crimes. First, we are advocating decriminalisation of breaches of matrimonial faith in the form of adultery; and second, we are not able to criminalise “marital rape” despite our revulsion against it. The Wolfenden Committee Report (1957) in England said that “unless a deliberate attempt is to be made by society, acting through the agency of the law, to equate the sphere of crime with that of sin, there must remain a realm of private morality and immorality which is, in brief and crude terms, not the law’s business”.

The Union law minister, Ravi Shankar Prasad, while introducing the bill, surprisingly said, “The Supreme Court has held triple divorce as a sin.” The bill is thus enforcing religious morality through the instrumentality of criminal law. If something is “sin”, let God punish the sinner. A civilised legal system should not enforce religious morality.

Similarly, his reference to Muslim countries is problematic as these countries are bad examples for mature criminal law like ours. We cannot incorporate retributive character of Islamic criminal law and dated offences like apostasy and blasphemy and have punishments like stoning to death or cutting of limbs. The example of Pakistan’s ordinance of 1961 is wrong as courts have held divorce without notice to arbitration council as valid (Muhammad Sarvar v. State, PLD 1988 FSC42). Since even capital punishment does not deter, this bill cannot be justified on the basis of deterrence as well. Muslim clergy should, however, come forward and incorporate progressive reforms in Muslim Personal Law.

From another angle too, the criminalisation of triple divorce is a unique case where law is dictating orthodox Hanafi Muslim women to continue in the relationship she considers “sinful”. Forcing the continuance of sexual relations in this situation seriously undermines “individual choice and autonomy”. On the one hand, we have so called “love jihad” curtailing “freedom to marry” a person of one’s choice and on the other, Muslim women are forced to continue with the same abusive husband, who has given them instant triple divorce. Parliament and the apex court may declare triple divorce as void but they cannot compel husbands to have a loving relationship with their wives. Ideally, choice in these cases should be left with the women.

Unfortunately, “crimes” originate in the government policy and, therefore, criminal law reflects the idea of “power” rather than “justice”. The state may decide to criminalise and decriminalise almost anything, even influenced by the electoral needs of the party in government. While participating in the debate in Parliament, BJP MP Meenakshi Lekhi said that “with Narendra bhai Modi as their brother, they (Muslim women) need not worry about anyone”. Roman Emperor Claudius, who wanted to marry his brother’s daughter, procured an amendment in the crime of incest that permitted a marriage between a niece and her paternal uncle, leaving the law unaltered as to other marriages between uncles and nieces or aunts and nephews which continued to be considered incestuous.

Jeremy Bentham rightly says that we should not use criminal law in three cases: If there is no evil in the act legislature endeavours to prevent, where punishment would be inefficacious, and where punishment would be unprofitable, that is, the evil of punishment is higher than the evil of the act. The purpose of criminal law is to forbid and prevent conduct that unjustifiably and inexcusably inflicts or threatens substantial harm to individual or public interests. Since the Supreme Court has set aside triple divorce, it no more dissolves marriages or threatens the security and well-being of the society.

The state must demonstrate “compelling state interest” in criminalising any act. In other words, the government’s objective in recourse to criminal law must be essential, and the proposed law must be the least restrictive means to attain it. Such an objective is not justified if it could be achieved by other means. For example, the government has a legitimate objective in restricting children’s access to pornography. But filters are equally effective in achieving this objective and therefore, criminal law need not be used.

The Narendra Modi government is doing a huge disservice to Muslim women as no husband on return from jail is likely to retain the wife on whose complaint he has gone to prison. The bill will lead to more divorces. The remedy to tackle triple divorce is thus worse than the disease. The bill also obliterates the distinction between “major” and “minor” crimes by providing the excessive and disproportionate punishment of three years.

Ravi Shankar Prasad said in the Lok Sabha that the government has no intention of interfering in the Shariah. If so, the best option within the Shariah to reduce incidence of triple divorce should have been given a shot. The bill should have made mandatory incorporation of triple divorce’s prohibition in the nikahnama (prenuptial contract) itself. Muslim marriage being a civil contract, husband will be bound by it. We may also say in the nikahnama that in case of violation of this condition, the dower amount will be increased to five times or the wife will be entitled to punitive damages.

The writer is vice-chancellor of NALSAR University of Law, Hyderabad. Views are personal