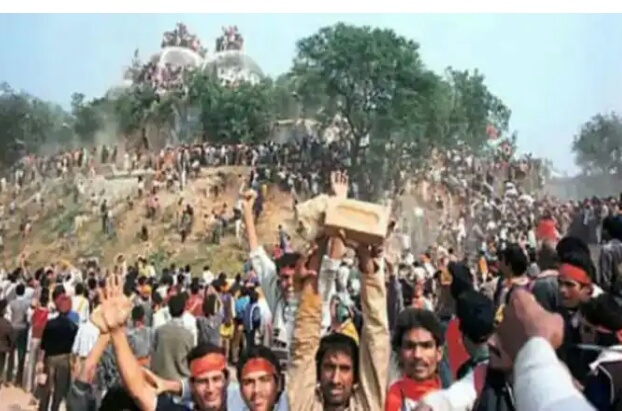 The sovereign-democratic Indian Republic came into existence on January 26, 1950, coinciding with the promulgation of a historic constitution which in its Preamble declared its firm commitment to “JUSTICE, social, economic and political; LIBERTY of thought, expression, belief, faith and worship; EQUALITY of status and of opportunity; and to promote among them all FRATERNITY assuring the dignity of the individual and the unity and integrity of the Nation…”

This Republic is slated for public execution on August 5, 2020, with great pomp and show at Ayodhya. The issue is not building of a peerless Ram Temple [Temple] at the place where once Babri Mosque [Mosque] stood. The legitimacy for the construction of the Temple was ‘managed’ courtesy the highest court of justice of India. Betraying all norms of fair-play, rule of law and common sense, the Supreme Court approved construction of the Temple despite admitting also that no Temple was destroyed to build the Babri mosque in the past, it was illegal to place the Ram idols in the Mosque on the night of 22-23 December 1949 and destruction of the Mosque by the Hindutva mob on December 6, 1992, was a criminal act. There is no doubt that Temple has the judicial sanction despite the criticism that what Hindutva zealots could not achieve on December 6, 1992, was facilitated through the judiciary.

This rushing up with the construction of the Temple at Ayodhya is a serious setback to the Indian democratic-secular polity but a far more dangerous spectacle would unroll at Ayodhya on August 5 when Narender Modi as PM of India, would perform Bhoomi Poojan [land-worship] for the Temple at 12.30 noon in the august presence of the chief of RSS, Mohanrao Bhagwat as chief guest. This moment is going to be the final death blow to the Indian Republic, the hectic preparations for which were afoot with Modi’s ascendancy to power. In fact, it started earlier when Modi as chief minister of Gujarat while talking to two Reuters journalists, Ross Colvin and Sruthi Gottipati, on July 12, 2013, had identified himself as a ‘Hindu Nationalist’ and credited the Rashtriya Swayamsevak Sangh (RSS) for instilling in him the spirit of a patriot.T

The Ayodhya ceremony is going to be the ‘vadh’ ceremony (a Brahmanical ritual) of Indian Republic is no exaggeration as the following facts would bear out the truth. When PM Modi does Bhoomi pooja at Ayodhya in the presence of RSS chief, Bhagwat, the chief guest, he knowingly would be violating the oath he took last time in 2019 as PM of democratic-secular Indian polity as RSS is dead against what Modi committed himself to.

Modi, when took over as PM in 2014 and 2019, took the following oath as prescribed in the Constitution:

“I, (name), do swear in the name of God/solemnly affirm that I will bear true faith and allegiance to the Constitution of India as by law established, that I will uphold the sovereignty and integrity of India, that I will faithfully and conscientiously discharge my duties as a Minister for the Union and that I will do right to all manner of people in accordance with the Constitution and the law, without fear or favour, affection or ill-will.”

PM thus is committed to uphold the constitution which according to the Supreme Court has following elements as ‘Basic-structure’, sovereignty, democratic and secular character of the polity, rule of law, independence of the judiciary, fundamental rights of citizens. This commitment of the PM Modi needs to be compared with the oath an RSS member takes where each RSS member is committed to work only for ‘Hindu religion, Hindu society, and Hindu culture ‘. It reads:

Before the all-powerful God and my ancestors, I most solemnly take this oath, that I become a member of the RSS in order to achieve all-round greatness of Bharatvarsha by fostering the growth of my sacred Hindu religion, Hindu society, and Hindu culture. I shall perform the work of the Sangh honestly, disinterestedly, with my heart and soul, and I shall adhere to this goal all my life. Bharat Mata Ki Jai.

RSS has been demanding that democratic-secular Indian wanted this Constitution should be replaced by Manusmriti or Manu Code which is known for its derogatory and inhuman references to Sudras, Untouchables and women. The Constituent Assembly of India finalized the Constitution of India on November 26, 1949, RSS was not happy. Its organ, Organiser in an editorial on November 30, 1949, complained:

“But in our Constitution, there is no mention of the unique constitutional development in ancient Bharat. Manu’s Laws were written long before Lycurgus of Sparta or Solon of Persia. To this day his laws as enunciated in the Manusmriti excite the admiration of the world and elicit spontaneous obedience and conformity. But to our constitutional pundits that means nothing.”

How loyal the RSS is to the Constitution of India can be known by the following statement of MS Golwalkar, the most prominent RSS ideologue. It is being reproduced from Bunch of Thoughts which is not only selection of the writings of Golwalkar but also a Bible for the RSS cadres.

“Our Constitution too is just a cumbersome and heterogeneous piecing together of various articles from various Constitutions of Western countries. It has absolutely nothing which can be called our own. Is there a single word of reference in its guiding principles as to what our national mission is and what our keynote in life is?”

When India resolved to become a democratic-secular Republic RSS, following in the footsteps of Savarkar, rejected out rightly the idea that Hindus and Muslims and other religious communities together constituted a nation. The English organ of the RSS, Organiser, on the very eve of Independence (August 14, 1947) editorially chalked out its concept of nation in the following words:

The RSS organ in the same issue denigrated the National Flag (which PM Modi is supposed to honour) in the following words:

“The people who have come to power by the kick of fate may give in our hands the Tricolour but it will never be respected and owned by Hindus. The word three is in itself an evil, and a flag having three colours will certainly produce a very bad psychological effect and is injurious to a country.”

The RSS, contrary to the principles of democracy, has been constantly demanding India to be ruled under a totalitarian regime. Golwalkar while delivering a speech at the RSS headquarters before 1350 top-level cadres of the RSS in 1940 declared,

“RSS inspired by one flag, one leader and one ideology is lighting the flame of Hindutva in each and every corner of this great land.”

In the history of independent India, there has never been such a brazen ganging up of an Indian PM with the RSS. Temple at Ayodhya, ostensibly, is being celebrated as redressal of the ‘wrong-done” by Muslims in the past (it may be interesting to note that Goswami Tulsi Das-1522-1623, who played the most prominent role in popularizing the story of Ram by penning Ramcharitmanas in India and the greatest worshipper of Ram did not mention in his epic penned between 1575-1576 that Babri mosque was built at the site of Ram Temple in the years 1538-1539) but the reality is that ‘Hindu nationalist’ PM is using the occasion as an opportunity to put the Indian Republic to death.

We demolished the Babri Masjid in 17 minutes : Sanjay Raut