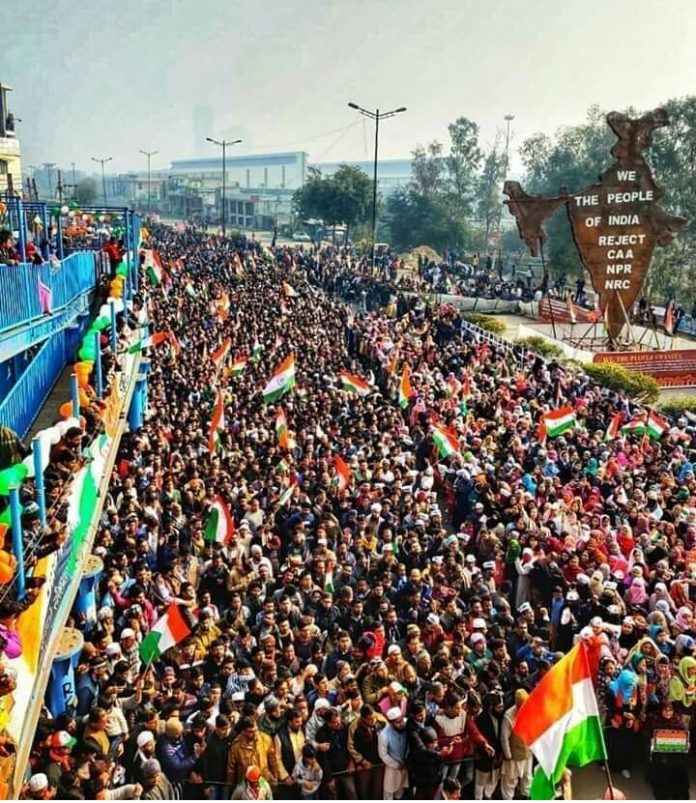 The world is witnessing an unprecedented movement for dignity and self-respect in the narrow streets and crowded lanes of almost every nook and corner of India. It’s a people’s movement in the most real sense. The loudest voices in this earth-shaking epic struggle are of those who, in general, live on the periphery of society.  Women and Youth are not only the faces but the spirit of the people’s march towards a brighter and better future.

It all began in the first week of December 2019. The government of India, under the leadership of the Hindu nationalist party, the Bhartiya Janata Party (BJP), passed an amendment in India’s citizenship laws that granted the right to Indian citizenship to the nationals of Pakistan, Bangladesh, and Afghanistan belonging to all religious communities except Muslims. The amendment stated that those had entered India before December 2014 would qualify for this provision.  It is the first time independent India used religion as a criterion of its citizenship. It goes against Article 14 of the constitution that states that the state shall not deny to any person equality before the law or the equal protection before the law within the territory of India.

The Parliament passed the law on December 11. The same day, a handful of students from the prestigious Delhi University, Jamia Millia Islamia, organized a peaceful sit-in at the campus against the act. The next day the numbers increased, and on December 15, students from other schools and colleges also joined the sit-in. It is on this day that the Delhi police under the instructions of the Home Ministry entered the campus uninvited and brutally beat up the students in the library, mosque and classrooms. The Police arrested several students and injured many more. The same night, the students of the Jawahar Lal Nehru University (JNU) and Delhi University (DU) gave the call to assemble at Delhi Police Headquarters to demand action against the police brutalities. The Police released all arrested students. But what happened next was unanticipated.

Universities after universities rose against the Delhi police brutalities and rejected CAA. The next day, a few women from Shaheen Bagh went to the scene of police brutalities and stood in silence protesting against the state violence. The following day, more women came out on the streets, and then they marched back to Shaheen Bagh to begin what now has become the most prolonged mass sit-in by women in the history of India.

Millions are participating in the sit-in. Millions more are organizing similar sit-ins in different parts of India. At least 100 cities have reported similar 24/7 sits-ins by women, children, and men. Among those participating are old and young, healthy and physically challenged, rich and poor, as well as women from all religious or no religious backgrounds.

The movement inspired India’s artists, writers, activists, and intellectuals who came in thousands to pay tribute to the women who, until recently, were behind the four walls of their homes. Shaheen Bagh became a place of pilgrimage to every self-respecting individual in the country and every freedom seeker.

The Hindu nationalists tried every trick to defame the movement. Yet, the women showed their determination to continue protesting against the CAA and the attempts to start a registry of citizenship known as the National Citizenship Register and National Population Register.

Meanwhile, the Prime Minister of India continues to lie about the citizenship act. His home minister explained to the nation in India’s Parliament the chronology of citizenship act, saying that first, he would introduce CAA then NCR.  But, the Prime Minister, in his public speech, heard all over the world, denied any intention to introduce NRC. He even said that his government never used the word NCR in the last years of its power. He also denied the existence of any mass detention centers, even though his government had acknowledged their presence.

CAA or NRC is just a symbol of resistance. Its ultimate goal is liberation from the divisive forces of hatred and bigotry.

During the last 70 years of independence, the Hindu nationalists under the leadership of Rashtriya Swayam Sewak Sangh created a narrative of the country that described Muslims and Christians as invaders and lower castes as unworthy of living a decent life. With its extensive and well-organized cadre, the RSS infiltrated all echelons of Indian society, including law enforcement agencies, academia, and the judiciary, as well as bureaucracy. With an absolute majority in India’s Parliament, it believes that it can turn India into a Hindu Rashtra on the pattern of Nazi supremacists by Hitler. The RSS founders and ideologue were in praise of Hitler, and they did not hide their intentions to reduce India’s non-upper caste communities into second class citizenship.

The People’s movement is against the usurpation of India by the RSS. For the soul of India, women and youth are on the streets putting their lives at stake. It is a historic moment not only for India but for the world. If India turns into a Hindu Rashtra, it will destroy not only India but also the world because the RSS version of Hindu Rashtra has no respect for science and the rights of other religions. This movement has serious implications for the world, and everyone who believes in human dignity and self-respect must take its notice.