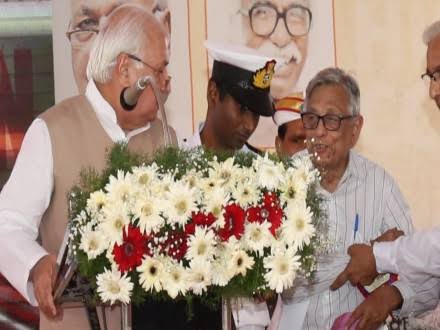 Kannur (Kerala) Dec 30 Historian Irfan Habib, presently embroiled in a controversy over his ”squabble” with Kerala Governor Arif Mohammed Khan, on Monday said that if the government wishes it can take away his posts.

“If they wish they can take away Professor Emeritus at the Department of History of the AMU and also another post, which is bigger than Emeritus,” said Habib to the media here on Monday.

Last week at the inaugural function of the 80th Indian History Congress in Kannur University, Khan alleged that Habib broke protocol and even went to the extent of pushing aside his security aides while he was speaking.

“I am an 88 year old man and his ADC would be around 35 and how can I do that. Everything is there for everyone to see and all saw also what happened,” the historian said.

After the episode the Kerala Governor”s official Twitter handle posted a picture of the incident and wrote: “Shri #IrfanHabib tried on stage to disrupt inaugural address questioning Hon”ble Governor”s right to quote #MaulanaAbdulKalamAzad, shouting that he should quote Godse. He pushed Hon”ble Governor”s ADC &amp; Security Officer, who prevented his unseemly gesture.”

Khan has taken the protocol violation seriously and had called up Kerala Chief Secretary Tom Jose to express his displeasure. He is reportedly mulling to take up the issue with the Centre.