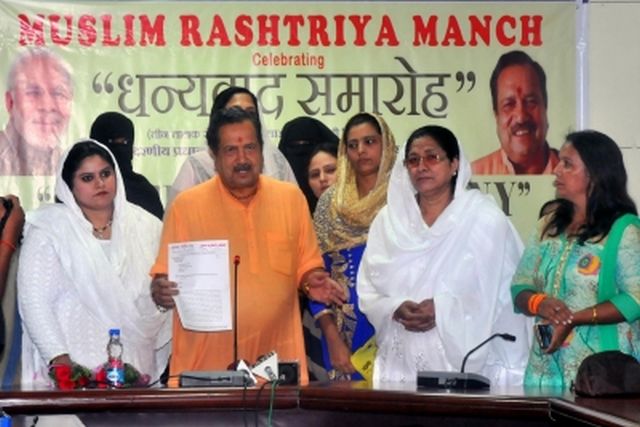 New Delhi, Aug 30 Along with many known and unknown affiliates of the RSS, one that works for the minorities, particularly Muslims, is the Muslim Rashtriya Manch or Muslim National Forum.

The scope of the organization remains minimal and the goal simple: reach out to liberal muslims, win their trust and bring them to Indic values as close as possible.

By Indic values, Muslim Rashtriya Manch tries to push for growing acceptability of vande mataram among Muslims, make a case against cow slaughter and push for Yoga. In fact, it held campaigns for abrogation of Article 370.

So how does one go about it? Md Afzal, its National Convenor, concedes, initially it has not been easy. But the acceptability has grown over the years.

And so has grown the number of campaigns by it. Afzal has been vocal against cow slaughter before Eid.

This independence day, this RSS body arranged Independence Day functions in over 1,000 madrassas and 500 dargahs across India. After the event, the MRM ensured everyone take a pledge that they will ensure no one can start a riot taking advantage of religious divide. According to Afzal, the tricolour was unfurled near the dargah of Jamia Milia Islamia and Hazrat Nizamuddin Aulia in Delhi.

The choice of venues for meetings and conclaves has got bolder with time. This time, Muslim Rashtriya Manch held its national council or Rashtriya Karyakarni, as they call it in Kashi, a place in Uttar Pradesh that has huge religious significance for Hinduism. In the conclave, resolution was passed against terrorism. How Muslims have been traditionally used as ”vote bank” was also discussed.

Indresh Kumar, the mentor of MRM this year launched a ”break up Pakistan” movement to create support for separatist and secessionist movements in Pakistan.

This June, the RSS leader had met representatives of 26 countries, including those from Israel, Bangladesh, Afghanistan, Mongolia, Egypt, Iran and UAE in two separate meetings. One took place in Mumbai and the other in Delhi.

MRM cadres, sources say, will be used for the campaign as well.

It may not be as voluble as the Swadeshi Jagran Manch, but MRM is one RSS affiliate that is silently but with focus executing the job given to it.IANS

What does this Shiite ‘bust-out’ stands for in UP?