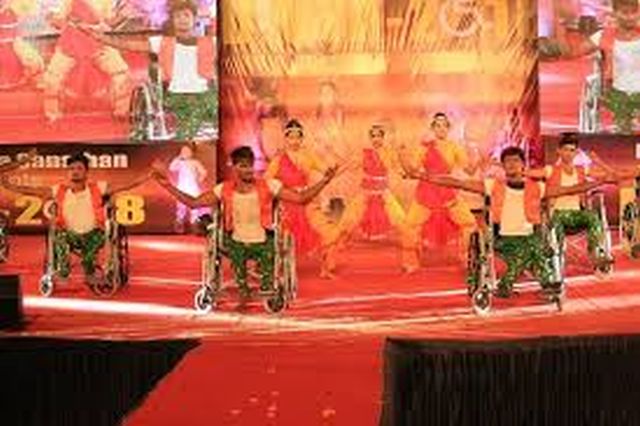 Udaipur : In a small village near this famous lake city in Rajasthan, thousands of physically challenged people are given a fresh lease of life. Not only do they receive corrective surgeries free of cost but, during the course of their treatment, they are also imparted training to repair computers and mobiles or learn the art of stitching to ensure they become self-reliant.

The Narayan Seva Sansthan houses in its premises a modern hospital, an orphanage, a smart school, skill imparting institutions, and centres for rehabilitation, physiotherapy and naturotherapy. It is branded as a “smart” village because it has all facilities and means of sustenance for all its inhabitants within the campus, including ATM machines, Internet connectivity and even its own toy train.

Set up by Kailash Agarwal ‘Manav’, a recipient of the Padma Shri for distinguished service, the sole mission of the organisation is to ensure that the differently-abled can stand on their own and start earning a livelihood when they leave the campus.

“Besides caring for the rehabilitation of the poor, needy and differently-abled people, we also equip them and their attendants with skills through computer, mobile repairing, sewing and tailoring classes. Over 4,276 people have benefited from this till date,” Prashant, who is Kailash Agarwal’s son, said.

Vinod Kumar, a physically challenged man from Agra with deformities in his limbs, expressed excitement on being trained in mobile repairing. With twinkling eyes, he told IANS, “I want to set up a shop and start earning once I go back to Agra. The best part here is that I am being trained while undergoing treatment.”

Asha Devi, who was here to get her grandson operated, said: “Although I am 60, I am enjoying learning to stitch frocks and kurtis in different designs. No one in our village has this expertise; hence I am confident that I shall earn a decent income.”

She said the Narayan Seva Sansthan had promised her a sewing machine when she returned to her village.

“As our lodging, food, training and treatment is all free, we treat this place as a temple where all our prayers are heard,” she added.

The organisation has also been conducting regular “mass marriage ceremonies” twice a year for young, physically-challenged boys and girls from underprivileged backgrounds. Till date, 1,298 such couples have tied the knot here.

Agarwal senior, who set up the organisation in 1985, started working for the cause of humanity after visiting a bloody accident site in Sirohi district in 1976, where seven people lost their lives.

“My father was working as a clerk in a post office when he heard about a bus collision in Pindwara, Sirohi. Taking leave from his job, he rushed to the site and was shaken to see the blood-splattered mess. With help from others, he admitted the injured to the general hospital. He started visiting the hospital daily to look after their needs,” Prashant said.

During these visits, he realised how patients battle with daily challenges while also grappling with financial crises. He saw they were hesitant to buy medicines and food as they had no money left with them after incurring medical expenses.

“To help such people, he started distributing a few containers, with ‘Narayan Seva’ written on them, among his relatives and acquaintances and asked them to put some flour in it on a daily basis. Every morning, he and my mother used to prepare chapatis out of the flour they had collected and feed the hungry. Even my sister and I helped,” he said.

While Kailash Agarwal kept this up on his own from 1974 to 1984, he set up Narayan Seva Sansthan as a non-profit charity organisation in 1985 to serve patients belonging to the poorest of the poor of society.

Over time, the organisation grew and is now among the few centres in the world where over 100 corrective surgeries of polio and cerebral palsy are done each day. The institute has given a new lease of life to over 325,000 people with free-of-cost polio corrective surgeries.

Not only does it provide treatment to the patients, it also ensures their relatives are taken care of. Once they reach Udaipur, all expenses of patients and their attendants are borne as long as they are at the institute for treatment.
Prashant said the organisation is blessed with a strong team of medical practitioners.

“With its headquarter at Udaipur in Rajasthan, the organisation has a 1,100-bed hospital where patients from around the country and abroad make their way for treatment and surgeries,” he said.

Irrespective of caste, creed and religion, the organisation serves all — Hindus, Muslims, Sikhs and Christians, he said.

It also runs a Narayan Children’s Academy, with its well-equipped classes, for tribal students residing nearby. It is a delight and surprise to see tribal students studying in e-classes. The organisation runs a school bus which picks up students in the morning, are given breakfast and lunch in school, and are dropped to their homes in the evening. This too is a free service.

The students are also provided school uniforms and stationery. The organisation also runs a residential school for the deaf and dumb, blind and mentally-challenged children.

However, Prashant said this was just a start as there are thousands awaiting their turn to get surgeries done.

“Our vision is to spread our wings to ensure that all differently-abled people walk with confidence, overcoming all odds — be it physical or financial.”

(The weekly feature series is part of a positive-journalism project of IANS and the Frank Islam Foundation. Archana Sharma can be contacted at archana.s@ians.in )