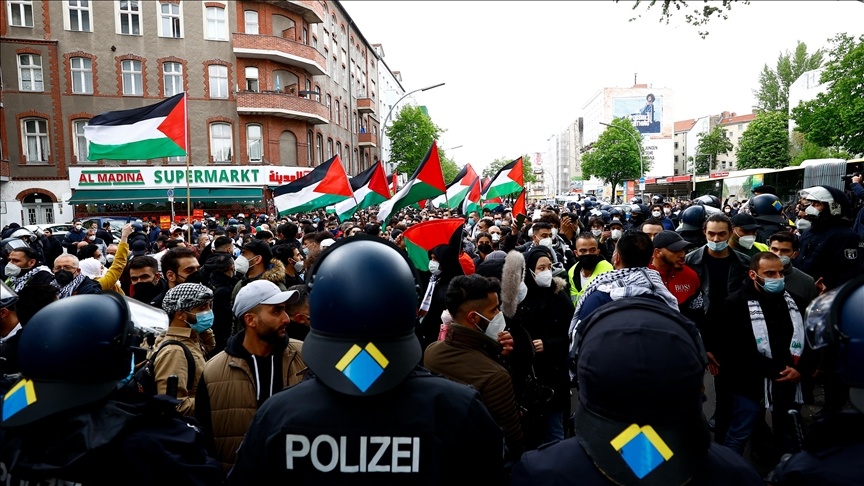 Thousands of people took to the streets in Berlin on Friday to voice their solidarity with Palestinians in Gaza facing relentless lethal bombing campaigns by the Israeli military over the past five days.

Waving Palestinian flags and chanting “Free, Free Palestine” and “Stop the killing in Gaza”, protesters expressed outrage over Germany’s unconditional support for Israel as hundreds of police were deployed along the demonstration route.

The protestors lashed out at the center-right government of Chancellor Angela Merkel for backing the Israel military aggression in Gaza, which has killed so far at least 122 Palestinians, including 31 children, and wounded more than 900 since the fighting flared up on Monday.

“Israel is murdering Palestinians while Merkel is financing it. Why?” the protesters chanted repeatedly.

Demonstrators, among them many Arab women dressed in traditional Palestinian dresses, carried placards saying occupied Jerusalem remains the capital of Palestinians and insisted on the right of return of all Palestinian refugees to their homeland.

There have been stepped-up efforts in recent days by the Israel lobby in Germany to ban pro-Palestine demonstrations under the pretext of “being outright anti-Semitic.”

The city of Frankfurt has reportedly prohibited an anti-Israel protest scheduled for Saturday.

Germany has been the scene of anti-Israel protests in numerous cities amid the mounting Palestinian death toll over the past days.