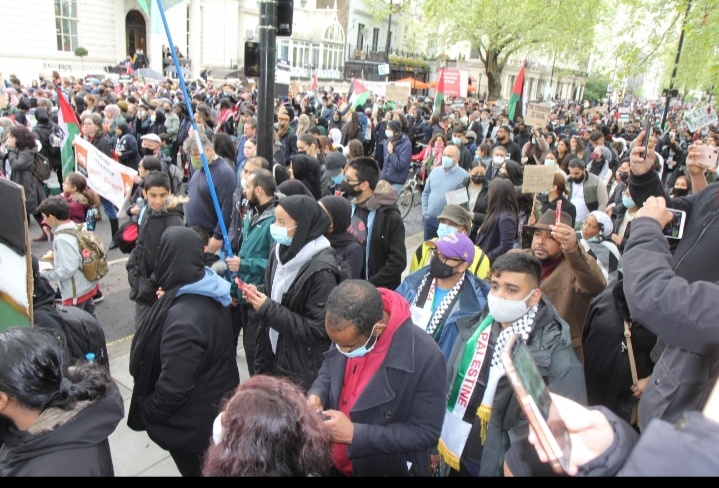 Chanting slogans, ‘From the river to the sea, Palestine will be free’; ‘One, two three four, occupation no more’; ‘five, six seven eight, Israel is a terrorist state’ they held a variety of pro-Palestine placards and waved the Palestinian flag.

Several speakers addressed the rally, including the former Labour leader and Islington North Member of Parliament Jeremy Corbyn, who was made to pay a heavy price by the Zionists for his high moral stand on and continued support to Palestinians, told the protests, ‘Look at the huge buildings in Gaza systematically and scientifically destroyed by aerial bombardment. I have been in those buildings during visits to Gaza. I visited human rights groups, mental health groups, media groups and people living in those apartments in those blocks.

‘Think what it’s like being a mother or father and seeing a building bombed in front of you, knowing your family is in there, and you can do nothing.’ 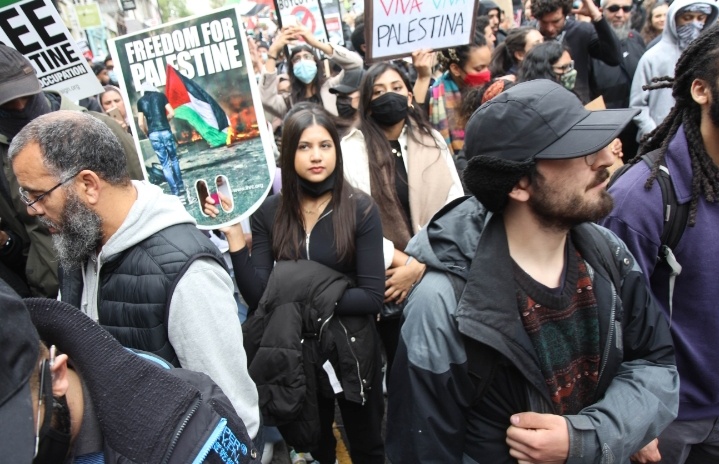 ‘It’s our global voices that will give succour, comfort and support in those settlements alongside Gaza and all over the West Bank, East Jerusalem who are suffering at this time.’

Former shadow home secretary Diane Abbott referred to the crowd as as part of a ‘worldwide movement for justice’.
‘We must remember we are part of an international movement,’ she said.

‘This is a worldwide movement for justice.

‘Palestinian people are having their land seized … and they are now being killed in their homes. All of this is illegal.

The death toll of Palestinians killed by Israelis continues to rise. In what the shamelessly insensitive western powers, including the ‘nice and humane’ American President Joe Biden, call ‘Israel’s right to self-defence’, 39 Palestinian children have been killed in the past week alone.

In their latest attempt to exercise their  ‘right to self-defence’ the Zionist brutes have attacked a building with several media offices, including Al Jazeera, Associated Press, Turkish news agency Anadolu and Middle East Eye