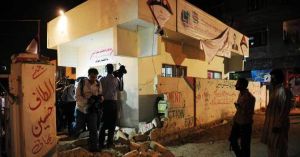 Islamabad, May 5 : Pakistan’s Muttahida Qaumi Movement (MQM) was observing a day of mourning Sunday after three people were killed and over 45 injured in two back-to-back blasts near its party office in the port city of Karachi last night.

The first blast struck near MQM Unit 153 office in the city’s Azizabad area, also home to the party’s headquarters, while the second one tore through the same area about 30 minutes later.

The second bomb proved deadlier as it went off when the rescuers, law enforcers, volunteers, and media persons were thronging the blast site.

Zafar Bukhari, a senior police official, first said it was a suicide attack. However, later it was found to be an improvised explosive device concealed in a concrete block.—IANS.